Pearl Shore was leaving the subway near Finch Ave. and Yonge St. in Toronto when she noticed two... 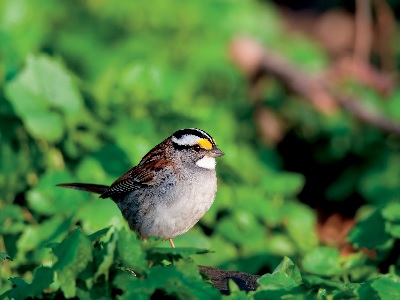 The white-throated sparrow is the most common bird species to collide with buildings in Toronto, according to FLAP Canada data. (Courtesy Never Collide)

Pearl Shore was leaving the subway near Finch Ave. and Yonge St. in Toronto when she noticed two dead crown kinglet birds at the foot of a nearby high-rise.

This spurred her into becoming a driver for injured birds — delivering them to the Toronto Wildlife Centre — before eventually forming her own volunteer organization: Never Collide.

A federal government FAQ states window collisions kill 16 to 42 million birds per year. In the U.S., estimates put the fatalities at 365 to 988 million birds per year. This works out to about 10 per cent of North America’s bird population, and birds which survive such collisions can still be left with concussions, shock, internal bleeding, broken bones or brain damage.

As a result, they can have more difficulty feeding and also make for easier prey.

“I was pretty frustrated that these billion-dollar corporations could not find the funds to prevent so many birds from dying with these towers. So I created a group called Bird-Safe Buildings Across Canada,” Shore said. “That took place in the beginning of January 2021.

“So I worked on my own for about a year and I met another lady and some other volunteers. Together we created (Never Collide).”

The Never Collide team is comprised of six volunteers with between 300 to 400 supporters.

One of the bird-safety products Shore and Never Collide encourage commercial buildings to use comes from the Toronto-based Feather Friendly. Founded in 2008, the company implements 3D-printed markers to reduce reflection from windows and glass railings for residential and commercial constructions and retrofits.

The markers have a lifespan of over 15 years and according to the company website reduce bird collisions by 95 per cent.

The organization also utilizes the Global Bird Collision Mapper — a crowdsourced map and log of bird collisions and deaths that can be sorted according to specific locations, breeds as well as fatal/non-fatal collisions.

Never Collide’s outreach began with the six towers at TD Centre in downtown Toronto where Feather Friendly bird-deterrent markers were installed in summer 2021 after about a year of dialogue with TD Bank and the owner of the complex, Cadillac Fairview.

“We did a petition, we wrote emails, we had meetings with them over the phone,” Shore recalled. “My brother attended the annual general meeting asking why they weren’t doing anything . . . It’s actually the largest bird deterrent marker project in North America that’s been completed.”

There’s also 100 Sheppard Ave. E, a 12-storey office building owned by Manulife Financial Corp., which saw its first two floors outfitted with markers in spring 2021. The project has continued this year, and Shore states markers have been installed on about 75,000 square feet of glass.

Shore says she has spoken to tenants and security guards, who haven’t seen dead birds since the markers were applied.

This year, the group has also written to the mayor’s office and the city’s corporate real estate division regarding Metro Hall at 55 John St., sending graphs and data produced from the Global Bird Collision Mapper. The result?

“They wrote back right away and said they would do it.”

Never Collide is also working with six commercial buildings to get the facades treated, using a combination of education and outreach.

It is also educating residential homeowners on measures they can take to protect birds.

This includes similar markers for homes from Feather Friendly and other companies, as well as a DIY test web app from the registered charity Fatal Light Awareness Program (FLAP) Canada.

The markers have proved a benefit for more than just the birds.

“We talked to a lot of tenants that actually are completely stressed out and in tears, and don’t want to go to work because they know that in the spring (and) fall, they’re gonna see these birds hitting the windows falling to the ground,” Shore said.

She explained it’s not always easy to get building owners to spend the money. Some owners express skepticism over the scale of the problem, saying there simply couldn’t be that many birds hitting reflective windows.

A common misconception Shore encounters is that many owners believe markers must be spread over the entire building, but that’s not the case.

“They need to go from the ground to either, depending on the building, 12 to 16 meters above grade, or the top of the tree canopy,” she explained. “Ninety per cent of birds collide within the first few floors.”

In May 2019, the Canadian Standards Association (CSA) introduced a national standard for bird-safe building design which has been adopted by some municipalities.

Chris Glover, the MPP for Spadina-Fort York, introduced a petition in October 2021 to pressure the Legislative Assembly of Ontario to adopt the CSA’s standard into the Ontario Building Code, which would require bird-friendly materials in new residential and commercial building windows.

At the time of writing, the petition stands at 2,109 signatures.

“We’re just trying to help him in any way we can,” Shore said.

In 2010, Toronto became the first city in the world to implement a bird-safe bylaw into its building code.  There are a million birds killed each year in the city alone.

In the GTA the City of Markham also has such a law, and in the U.S. both New York City and San Francisco have instituted protections for birds.

“What I’d love to see is a bird deterrent marker or bird safe design included in the LEED certification (or BOMA),” Shore said. “It’d be great if corporate property owners could get points for having a bird-safe building.”

CubicFarms says its growing systems cut energy use over 50%