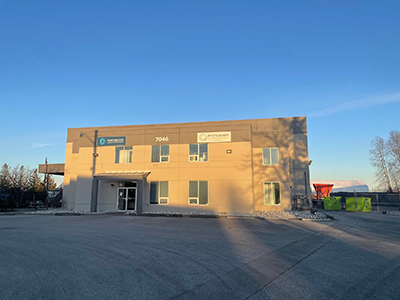 Northstar Clean Technologies Inc. is preparing to take its asphalt shingle recycling process to the commercial level, meaning millions of tonnes of building waste could ultimately be diverted from landfills.

The Vancouver-based company is focused on the recovery and reprocessing, using a proprietary design process, of the three component parts that comprise single-use asphalt shingles: liquid asphalt, fibre and aggregates.

“It’s about a 15-step process and it’s not like when something goes wrong, we can just call customer service. There’s no IKEA manual. In the development life cycle, we are right at the cusp of commercialization,” said Carson Sedun, Northstar’s director of corporate development. “So we should actually expect to announce some positive news regarding our first sale out of the pilot facility (in the third quarter of 2022).”

Company estimates forecast a $1.76 billion Canadian market and a $9.13 billion market in the U.S. for this type of recovery service. Between 70 to 84 per cent of homes built in the U.S. have asphalt shingles, and each year 12 million tonnes of used product is sent to landfills.

Founded in 2015, the company completed a $12.24 million financing and listing on the TSX Venture Exchange in July 2021 under the ticker ROOF-X. The company runs a 20,000 square foot pilot facility in Delta, B.C. with a ‘flagship’ facility planned in Calgary.

In February, Northstar applied for a patent application in the U.S. for its technology, which Sedun expects to take about a year.

Northstar’s process is known as the Bitumen Extraction and Separation Technology (BEST).

According to Sedun, a single asphalt shingle is comprised of 25 per cent liquid or oil, 25 per cent fibre and 50 per cent aggregate.

The oil makes up Northstar’s main product “where all the juice is.” Based on the U.S. figures, shingles destined for landfill add up to 18 million barrels of oil wasted each year. In Canada, he estimates that oil could sell for between $850 and $875 per tonne.

“Our revenue model is fairly unique in that we get paid on inputs, and we get paid on outputs,” Sedun said. “There aren’t many businesses that I know where you get paid for taking the feedstock and so in our case, we have what’s called tipping fees.”

Tipping fees are when waste haulers and roofing contractors pay municipal landfills to drop off their products. As he explained, the fee in Vancouver is around $130 per tonne, while in Toronto it’s about $125.

“If you were to split up the revenue composition from our financial model, what we’re looking at is kind of a ballpark 30 per cent from tipping fees, say 65 per cent from liquid asphalt and then five per cent from fibre and aggregate,” Sedun said.

He also mentioned plans for introducing carbon credits as another revenue stream down the line.

Northstar’s Delta facility processes 10 to 20 tonnes of shingles per day, with plans to increase to between 30 and 40 tonnes per day in the third quarter. The ultimate goal is commercial production, which the company defines as processing 50 to 75 tonnes daily.

The Calgary facility and expansions

While Northstar utilizes some U.S. figures, it has yet to finalize plans for an immediate southern expansion.

This month, Northstar completed a non-brokered private placement with Renewable U Energy Inc. in Calgary for 1,250,000 common shares at a price of $0.40 per share for gross proceeds of $500,000. Renewable U also signed a non-binding and non-exclusive term sheet covering Northstar’s Phase 1 expansion program of three facilities.

Sedun breaks down Phase 1 as the Calgary facility, another facility in Toronto or the Greater Toronto Area, followed by a third in Portland or Seattle.

“It’s like a McDonald’s, right? It’s a modular design, they look the same, they have the same equipment, they have the same size, the same number of people (and) everything is the exact same,” Sedun said. “Now Toronto is obviously a bigger market than Calgary and if it’s three times the size, we want to build three facilities in the GTA, not one.”

The Calgary facility is planned to start construction during Q3 2023. A front-end engineering design (FEED) study was completed at the site in the first quarter of this year. The site is targeting 150 to 200 tonnes per day, which is two to three times more than the Delta location, in an estimated market size of 30,000 to 50,000 tonnes per year.

Under a number of operational assumptions, the FEED study showed an $11.8 million estimate of total capital costs, with $7.6 million in potential annual revenue per facility.

The local market liquid asphalt price works out to about $900 to $1,000 per tonne, with municipal tipping fees at around $110 per tonne.

The company is also negotiating a long-term off-take agreement for the facility, which it hopes to be able to announce in the third quarter.

“Our long-term vision is to ultimately be a sustainable processing provider to every major Canadian municipality,” Sedun said. “Then later down the road into the U.S. as well.”

“In five years, we hope to have 10 facilities.”