An older warehouse in Hamilton’s East Bayfront area is being redeveloped and modernized to become... 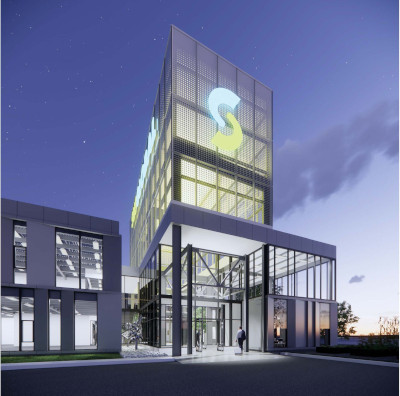 An older warehouse in Hamilton’s East Bayfront area is being redeveloped and modernized to become SusGlobal Energy’s headquarters and home to a new state-of-the-art production facility.

The company, whose technology converts green bin waste into pathogen-free liquid organic fertilizer and dry compost, said the new production, warehouse and regional distribution facility will have the capacity to produce about $2 million of organic fertilizer daily.

“The whole idea is to divert these organic waste streams from landfill, for obvious reasons, reduce greenhouse gas emissions as part of the climate change initiative, and be part of a circular economy model producing regenerative products,” said Marc Hazout, president and CEO of SusGlobal.

“We’ll be able to ultimately scale up and process our liquid fertilizer product on a large scale. We’re going to go from producing 1,000 litres a day to 100,000 litres a day.”

SusGlobal, currently headquartered in Toronto, was established in 2014 and began operations in 2017. The company employs about 16 people but Hazout said that will eventually grow to at least 40 people.

The company has been operating a facility in Belleville for four years, which will remain operational after the Hamilton facility opens.

Hazout said the company wants to develop a regional model, encompassing Western Ontario and Eastern Ontario, with the Greater Toronto and Hamilton Area in the middle.

“We identified the Hamilton facility about three years ago. It was vacant for three years. It was a mortgage fund that owned it . . . We identified that space because of the fact it has an ECA (Environmental Compliance Approval) licence and the location,” said Hazout, adding Hamilton is ideally suited in a population-dense area, as well as its vicinity to vineyards and cannabis producing areas.

“The ECA allows for the processing of approximately 65,000 (metric) tonnes per annum.”

The Hamilton facility will be designed using Building Information Modelling (BIM) technology with advanced visualization, energy modelling and a high level of technical detailing to ensure durability. Built on 3.26 acres, the 40,000-square-foot facility will produce, distribute and warehouse the company’s SusGro organic liquid fertilizer and other private-label products sold through big box retailers, consumer lawn and garden suppliers, and for end-use for the wine, cannabis and agriculture industries.

The new facility will run 24 hours per day, seven days per week, processing that organic waste indoors with no odours.

With 11,000 square feet of office space and research and development labs, it will also house the continued development of SusGlobal’s proprietary formulations and branded liquid and dry organic fertilizers.

ZAS Architects is designing and developing the new facility. The architecture retains and highlights the structural skeleton of the existing warehouse tower. The exterior façade will be re-clad with transparent materials, blending the industrial past of the site with its modern and progressive use.

Paul Stevens, senior principal at ZAS, which is based in Toronto with offices in Vancouver and Dubai, said the Hamilton facility is a simple, pre-engineered warehouse built back in the early 1990s. It was the former site of an animal pellet production plant.

Part of the existing building has a tower about 3.5 storeys high which was used to position hoppers and industrial equipment. The tower is being stripped down to its raw steel to become the new entrance to the building.

Stevens explained that Zas Architects is repurposing the entire warehouse by improving its street-facing façade and transforming the industrial architecture of the building into public working spaces.

“The design of SusGlobal’s new facility in Hamilton East Bayfront embraces the past and celebrates the future, creating a healthy and wellness-focused workplace that signals the changing face of Hamilton’s industries and its emerging green economy.

“This project also provides an opportunity to rethink how we approach the design of sustainable waste management facilities as integral sites in our city landscape.”

The building will be re-clad to improve energy performance and translucent panels will be introduced to the walls to brighten up the space. Stevens said the building is at an important location just off of the QEW in Hamilton — an excellent location for brand recognition.

“What we are trying to do is capitalize on the good qualities of an industrial building, repurpose it and really kind of raise the bar in terms of creating some architecture which is distinctive, modern and accessible,” explained Stevens.

He also revealed that some of the spaces in the addition will be set up for researchers or academics who are interested in the circular economy and the organic fertilizer product that SusGlobal produces.

Stevens explains that school children will be welcome to visit the facility to see how the fertilizer is produced and learn how large amounts of waste end up in green bins and garbage bags. Events such as Science Days can also be held in the building.

“I think SusGlobal is in a fantastic position to generate a really usable product, which is organic, with no pathogens in it whatsoever,” said Stevens, who also added that people need to support industries like this.

“We need to actually grow our food as healthy as possible and not have to rely on chemical fertilizer and all these kinds of things we’ve just accepted over decades.”

SBC Staff Waste Recycling National Jun. 22 2021
M
Mario Toneguzzi Business reporter
Mario Toneguzzi, based in Calgary has 37 years of experience as a daily newspaper writer, columnist and editor. He worked for 35 years at the Calgary Herald covering sports, crime, politics, health, city and breaking news, and business. For 12 years as a business writer, his main beats were commercial and residential real estate, retail, small business and general economic news. He nows works on his own as a freelance writer and consultant in communications and media relations/training.