TC Energy, a Calgary-based energy infrastructure company, has announced it is building its first... 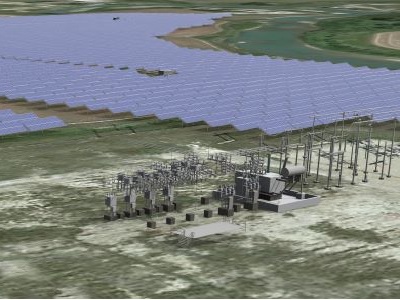 A rendering of the the 81 MW Saddlebrook Solar Project located near Aldersyde, Alta. (Courtesy TC Energy)

TC Energy, a Calgary-based energy infrastructure company, has announced it is building its first Canadian solar project near Aldersyde, Alta for $146 million.

The development in pre-construction is named the Saddlebrook Solar Project. It will generate 81 MW of electricity, which is enough to power 20,000 homes annually according to a press release. It will also feature a flow battery energy storage system.

A flow battery energy storage system is a battery that stores energy as an electrolyte and has been used for solar and wind energy storage.

The first part of construction will involve the installation of solar panels on TC Energy property in a local industrial park.

Construction is expected to be completed in 2023 and all regulatory approvals and permits were obtained. About 140 workers are expected to support the project and TC Energy expects two full-time employees to work at the facility when the project is in operation.

Corey Hessen, TC Energy’s president of Power and Energy Solutions, said in the press release: “This investment bolsters our ability to deliver low-carbon solutions for our customers and underscores our commitment to add renewable energy to the local electricity grid.”

The Saddlebrook Solar Project is the latest effort from TC Energy to diversify its energy mix. The company, known for its natural gas and oil pipelines in North America, has expanded into solar energy and two hydro pumped storage projects.

A news release from 2021 outlined TC Energy’s renewables plan, with the company expecting to, “. . . identify and contract with and/or invest in renewable energy projects that could generate up to 3.2 million mWh/year of zero carbon energy comprising of up to 620 MW of wind, 300 MW of solar and 100 MW of battery storage capacity.”

TC Energy says it has acquired more than 400 MW of renewable power via power purchase agreements in Alberta in the past 24 months.

Tyler Choi Energy TIU Canada Calgary Sep. 15 2022
Tyler Choi Business editor, Sustainable Biz Canada
Tyler Choi is a journalist based in the Toronto area. He has covered a wide range of sectors ranging from science and technology, the environment, business, government policy and crime, to finance. Among the many people he has interviewed, his favourite was an Ig Nobel Prize winner.