Toronto-based Crown Realty Partners announced it has exceeded its Scope 1 and 2 emissions reducti... 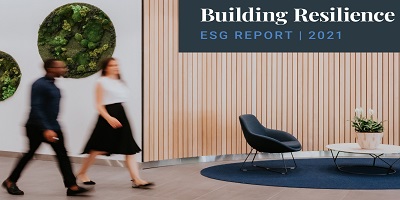 Toronto-based Crown Realty Partners announced it has exceeded its Scope 1 and 2 emissions reduction target and incorporated climate-related risk insights as part of its governance model in its latest ESG report.

The reductions in GHG emissions, energy-use intensity and water-use intensity were attributed in part to lower building occupancy and operational efficiencies resulting from the COVID-19 pandemic. Crown Realty also lowered its GHG emissions by powering its Greater Toronto Area management offices with renewable energy from Bullfrog Power, cutting its carbon dioxide emissions by 90.2 metric tonnes in 2021.

98 per cent of portfolio sustainably certified

Crown managed to certify 98 per cent of its fund portfolio under various sustainability programs by the end of 2021, meeting its 2020 goal of 90 per cent. The certifications were earned from LEED (Leadership in Energy and Environmental Design), BOMA BEST (Building Owners and Managers Association Building Environmental Standards), WiredScore, Fitwel and EnergyStar.

The company said it plans to ensure all assets within its fund portfolio are sustainably certified within 12 months of being acquired and all new acquisitions are registered for Fitwel certification within the first two years of ownership.

Crown Realty consulted on climate-related physical and transitional risks to its portfolio in 2021 to better incorporate climate-related impacts and opportunities into its risk management, strategic planning and decision-making processes. Risk assessments will be part of any future fund acquisition and used for its net-zero carbon transition plans, Crown Realty added.

For its diversity, equity and inclusion (DEI) initiatives, Crown Realty embarked on its first cross-company DEI survey with a third party. It said the data will help identify ways to understand and foster an inclusive workplace.

Crown Realty reports 56 per cent of its senior management team are women.

Canadian energy distributor Enbridge made incremental steps toward its GHG reduction goals its 2021 report indicates, and noted advancement on workplace diversity and governance.

In 2021, Enbridge said it reduced its Scope 1 and 2 GHG intensity by approximately 27 per cent from the 2018 baseline to reach 564 tonnes of carbon dioxide equivalent per petajoule of energy (tCO2e/PJ). It emitted 770 tCO2e/PJ in 2018. Enbridge’s objective is to minimize its GHG intensity 35 per cent by 2030.

While Enbridge’s Scope 3 emissions remained largely unchanged (and account for the vast majority of its emissions), the company notched a 20 per cent reduction in the potent GHG methane from 2018 to 2021.

The pathway Enbridge set for further reducing its GHG intensity entails modernization and innovation (30 per cent); procurement of low-carbon power (45 per cent); self-powering its assets (15 per cent); and investing in renewables and low-carbon infrastructure (10 per cent).

To achieve net-zero by 2050, Enbridge will focus on modernization and innovation (20 per cent); procurement of low-carbon power (15 per cent); self-powering its assets (10 per cent); investing in renewables and low-carbon infrastructure (30 per cent); and offsets and carbon credits (25 per cent).

One example of modernization is a US$2.1-billion program to replace older, less efficient, natural gas-fired compressors. Low-carbon and renewable investments include offshore wind projects in France and early investments and development into renewable natural gas, hydrogen and carbon-capture utilization and storage.

For 2022, Enbridge added a new list of criteria to its ESG goals. The company will require all new investments to align with its emissions goals, collaborate with organizations advancing science-based guidance for midstream, work with key suppliers on emission reduction plans, include a net-zero scenario analysis in its sustainability report and further develop low-carbon partnerships.

For workplace diversity, Enbridge stood at 23 per cent of its workforce with racial and ethnic representation in 2021, inching toward its aim of 28 per cent by 2025. It also made progress on hiring employees with disabilities, veterans (in the U.S.), women and indigenous peoples.

Enbridge has published ESG or sustainability reports since 2001.

Jordan Maxwell ESG ESG International May. 31 2022
Tyler Choi Business editor, Sustainable Biz Canada
Tyler Choi is a journalist based in the Toronto area. He has covered a wide range of sectors ranging from science and technology, the environment, business, government policy and crime, to finance. Among the many people he has interviewed, his favourite was an Ig Nobel Prize winner.