KPMG in Canada aims for net-zero by 2030 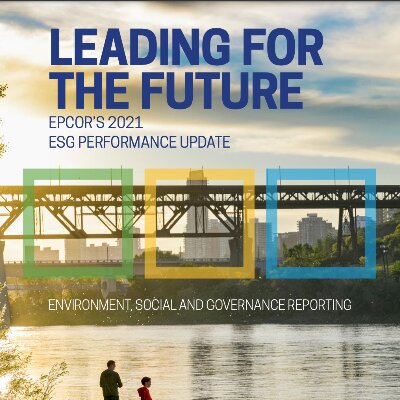 Edmonton-based utility company EPCOR is highlighting its net-zero emissions targets and initiatives to reduce Scope 1 and 2 emissions as part of its environment and climate change strategy.

EPCOR updated its target and goals in its 2021 ESG report, noting it plans to cut net Scope 1 and 2 emissions in half by 2025, and 85 per cent by 2035 compared to 2020 emissions. The company also updated its progress against 25 measures and 17 targets introduced last year.

Through the acquisition of two San Tan water and wastewater districts in Arizona, EPCOR also expanded its operational footprint, which led to a five per cent increase in overall emissions year-over-year.

At least 75 per cent of EPCOR’s emissions come from electricity consumption used to pump large volumes of drinking water through the treatment process and to customers, and to move and treat wastewater.

EPCOR will invest $1.3 billion in Edmonton’s water cycle utilities over the next five years to protect communities from flooding, and introduce technologies that improve environmental performance and reduce costs.

The company says it made progress on two projects to green its electricity supply: a solar farm to support its Edmonton operations, and procurement of renewable energy attributes from the Hilda Wind Farm, now entering construction in Southern Alberta’s Cypress County. Both projects are expected to wrap up by the end of the year.

It collaborated with other community partners in Edmonton to establish green infrastructure projects, such as dry ponds and improvements to drainage infrastructure, to reduce the inflow and infiltration of groundwater into the system.

With a focus on zero-emission transportation, NFI has zero-emission buses or coaches operating in over 80 global cities. This includes markets such as Ireland, Britain, New Zealand and Australia, where the company expanded in 2021.

Additionally, NFI struck a deal with Li-Cycle Holdings Corp. (LICY-N) to expand its battery recycling partnership with the Mississauga-based company, whose Spoke and Hub facilities recycle a variety of lithium batteries.

On a social level, NFI has committed to $7 million in employee training; conducted a living wage assessment for employees at the company’s main transit bus production facility; and formalized a human rights statement, which includes freedom of association.

NFI buses were featured at 26th United Nations Conference of the Parties (COP26) in Glasgow, Scotland.

Chorus Aviation Inc. (CHR-T) of Halifax has released its latest ESG report, aligning the company with seven of the 17 Sustainable Development Goals (SDGs) outlined by the United Nations.

Good health and wellbeing, gender equality, decent work and economic growth, and reduced inequalities were four of the aligned SDGs. Responsible consumption and production, climate action, and partnerships for the goals rounded out the list of seven.

As a result, the company announced it will target net-zero emissions within its operations by 2050. It also plans to increase representation for employees at all levels, as defined in the Employment Equity Act, by 2027.

Chorus Aviation’s recent acquisition of Falko Regional Aircraft Limited could ultimately help the company achieve its goals, the report notes. Chorus says the deal transforms it into a full-service provider in regional aviation, and positioned the company as the world’s largest aircraft lessor.

Valued at US$4.5 billion, the merger included 348 regional aircraft and the beneficial interests in five aircraft trusts on a deferred basis prior to the end of Q2 2022.

The company has managed aircraft with 32 airlines in 23 countries, and the deal is expected to help Chorus Aviation to expand and compete in other global markets.

Chorus Aviation also secured a strategic investment from Brookfield Asset Management, a Canadian multinational investment firm with more than US$688 billion in assets under management in 2021. Brookfield bought a 12.5 per cent share in the company, and Chorus will leverage Brookfield’s expertise and resources through addition(s) to its board.