In a new report, IDTechEx concludes that the world is well on its way to transitioning to electri... 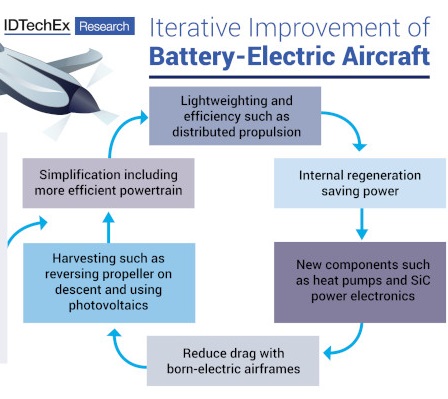 In a new report, IDTechEx concludes that the world is well on its way to transitioning to electric aircraft.

The report, entitled, “Manned Electric Aircraft: Smart City and Regional 2021-2041“, reveals Cessna, Cirrus and Piper are all surprised by the interest in electric aircraft, as the purchasers are predominantly pilot training and air taxi companies which depend on reliable products to conduct their businesses.

However, efforts to make all modes of transportation more climate-friendly have increased, especially in light of the Intergovernmental Panel on Climate Change’s sixth assessment report, which warns that global temperatures will increase by 1.5°C or more during the 21st century unless rapid reductions are made in CO2 and other greenhouse gas emissions.

In 2018, aviation emissions alone were responsible for approximately 6 per cent of climate change worldwide. Half of this impact was caused by frequent flyers, representing only one per cent of the world’s population.

The potential for battery-electric aircraft

Attention is now turning to larger two-propeller, fixed-wing aircraft, capable of carrying up to 10 passengers at a time. However, battery experts and aeronautical engineers have questioned approaches to larger aircraft because they require more power, and the proposed aerodynamics can be problematic.

IDTechEx’s battery team warns lithium batteries with the necessary size and energy density are unlikely to be available by 2026. However, several regional aircraft manufacturers have promised otherwise.

Other barriers have arisen, such as Bye Aerospace’s partnership with Oxis Energy disintegrating after the latter went under. Oxis was slated to be Bye’s battery supplier for its eight-seat eFlyer 800 electric airplane.

IDTechEx advises 2030 will probably be the earliest these high-energy density lithium-sulfur batteries will even be available for full deployment.

Aircraft developers, including Aura Aero and Regent, are more skeptical, however, when it comes to the availability of a battery with the energy density required to power a plane.

Battery expert, IDTechEx, explores the potential for this technology in its “Solid-State and Polymer Batteries 2021-2031: Technology, Patents, Forecasts, Players” report.

When it comes to speed, aerodynamics and construction are crucial to larger battery-electric aircraft; to go 50 per cent faster requires three times the battery. Cars use two times the battery to get more range, but this is less effective with aircraft.

With a conventional airframe, lithium-ion batteries are one-third of the weight. However, the batteries would need to be changed fairly regularly, and only short-range flights would be possible in cold or rough weather.

IDTechEx says a smaller wing volume can increase range by 10 per cent. NASA, the German Aerospace Institute DLR and other organizations support this as well.

IDTechEx believes that large battery aircraft like this should not be abandoned, citing the example of Rolls Royce, which is developing an 11-seat aircraft, along with Tecnam and Widerøe, for 2026. The aircraft will be intended for flying short distances in Scandinavia.

IDTechEx says there is a lot to learn from Tesla’s approach to cars, including powertrain efficiency, lightweighting and simplification.

The company explains that a regional aircraft can have 500km of cabling, but in cars, at least 50 per cent of cable weight is eliminated by higher voltage, improved geometry and board-to-board wireless connection.

In-mold electronics, structural batteries and large aluminum die castings eliminate the need for at least 1000 parts. However, although solar upper-atmosphere drones can fly for five years on solar alone, the necessary three to five multijunction solar bodywork required for a business or regional aircraft would cost $100,000 and contribute only 5–10kW.

Better options — inspired by electric vehicles — are available for larger aircraft and are detailed in IDTechEx’s report, “Routes to 1000 Mile Electric Cars 2021-2041”.

Founded in 1999, IDTechEx has provided independent market research, business intelligence and events on emerging technology to clients in over 80 countries.

The company tracks the adoption of electric vehicles, battery trends and demand across more than 100 mobility sectors.

Electric trucks soon to roll between Edmonton and Calgary