Vicinity Motor Corp. has launched the VMC 1200, the first Class 3 medium-duty electric truck to b... 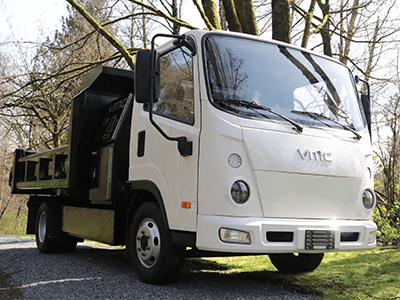 Vicinity Motor Corp. has launched the VMC 1200, the first Class 3 medium-duty electric truck to be manufactured in Canada.

The VMC’s distribution is expected to begin this month, with Aldergrove, B.C.-based Vicinity (VMC-X) predicting it will make up a significant portion of near-term sales.

Vicinity got its start with mid-size transit buses in 2008, before transitioning to the electric space. It currently employs between 50 to 60 people at its headquarters. While parts are sourced globally, the electric vehicles (EVs) are designed and engineered at Aldergrove.

“We thought by taking the same technology that we’re putting on our bus and really developing it into a small work truck, it would give us a much broader customer base with existing customers that we currently had,” said William Trainer, Vicinity’s CEO and founder. “Because in the transit bus market, it can be very lumpy (in terms of funding).”

Vicinity also sells the clean-diesel Vicinity Classic and the electric Vicinity Lightning buses as well as the VMC Optimal EV shuttle bus and a proprietary electric chassis via its strategic partner EAVX.

Class 3 is a ranking given to vehicles depending on the maximum safe weight they can carry, called a gross vehicle weight rating (GVWR). In the case of the VMC 1200, Trainer states its GVWR is 12,000 pounds. Without the truck bed, the VMC weighs just under 6,000 pounds.

It is ideal for everything from delivery to construction, dump truck work and last-mile delivery, according to Vicinity.

The company predicts North American light and medium-duty EV inventories to top one million by 2030 and six million by 2040.

The new EV will use lithium-ion batteries that provide 150 kWh in power. With Level 2 charging it can go from about 20 per cent to 100 per cent in five to seven hours, and with Level 3 charging can accomplish that in 2.5 hours. It can travel 241 kms on a single charge.

The CEO said that in the Greater Vancouver Regional District, where the company is located, there are many work yards where the same class of truck is being deployed every day. He also suggests use for the trucks in helping with park upkeep and maintenance as one can’t get a regular-sized dump truck into many parks.

“We have a dealer network that we’re putting in place across Canada. We look after the municipalities directly ourselves. But we’ve also put the vehicle in some truck yards, and particularly automobile yards, we like that business model,” Trainer said. “Here in B.C., we use the Pioneer Auto Group based in Mission, B.C. with 19 locations throughout the province.”

The VMC will have an MSRP of around $150,000 and Trainer said there are provincial incentives that will allow for up to a $40,000 discount per truck. The VMC has also qualified for Transport Canada’s $550 million subsidy program for medium-duty zero-emission vehicles. Trainer said it could qualify for a $30,000 to $40,000 rebate, although at the time of writing the process was still underway.

Currently, Vicinity has 20 VMCs sold and ready to be shipped out in the next week or two. Starting in January, it’s gearing up to produce 50 vehicles each month, and that’s just to start.

Trainer sees the company producing a thousand VMCs each year for Canada.

In July 2021, Vicinity broke ground on its first U.S. assembly plant in Ferndale, Wash. where it plans to produce 1,000 vehicles annually. While it’s primarily intended for buses, there is a possibility to manufacture trucks there as well. However, any decision wouldn’t come until manufacturing is maxed out on the Canadian side.

Trainer didn’t provide specific prospects on the number of sales or clientele, but he’s optimistic about the VMC’s potential. It only took the company three years to develop the VMC, compared to what Trainer said is an average of five, thanks to its experience with electric buses.

“If you look at the Class 3 to 5 truck market, or just market in general, there’s about 400,000 vehicles sold per year in that in that segment (in North America). The work trucks aren’t as big as the overall market, but we’re getting a lot of excitement, a lot of inquiries here on the vehicle.”

He also envisions future iterations of the VMC, specifically a Class 5 version “to give it that extra weight.”

Kite gets new funding for app linking people to e-vehicles