A new organization aims to bring together key Canadian industries to establish a zero-emission ve... 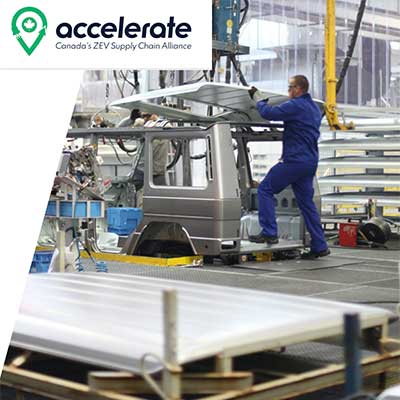 A new organization aims to bring together key Canadian industries to establish a zero-emission vehicle supply-chain strategy. Accelerate wants involvement from every stage of the auto production supply chain, from mining critical minerals through to the manufacturing of the vehicle parts, research and development, commercialization, assembly and infrastructure.

So far, Accelerate is comprised of 24 companies and organizations which have collectively given themselves five years to reach their goals. Some of its members include Clean Energy Canada, the Battery Metals Association of Canada (BMAC), Unifor, Canadian Colleges for a Resilient Recovery and Red River College.

“At the end of the day, if we’re going to have a sustainable economy and a sustainable Canada, we do need to be purposeful in developing the strategies.”

That aim would include keeping Canada’s current automotive footprint intact. The industry currently employs around half a million people. Its website boasts that Accelerate “is the only national initiative that includes key players from across the ZEV supply chain.”

Fortier was appointed Accelerate’s CEO in November. Previously, he was vice president at the non-profit Institute of Corporate Directors. He has also held senior corporate and public affairs roles at Re:Sound, TD Bank and the Business Council of Canada.

Accelerate’s six pathways for achieving its goals are:

Creating the roadmap will be Accelerate’s first goal.

“So that means to me, mapping where our strengths are in Canada, where the gaps are, where investment needs to be pointed to,” said Fortier. “So the immediate priority for me is that roadmap access, so that we can all sort of see where the opportunities are, and where we need to do more work together.”

For Fortier, the biggest challenge at the moment is simply that other jurisdictions like Europe, Australia and the U.S. have “jumped on this opportunity” particularly in the area of battery production. On the other hand, he said Canada might have an advantage due to its end-to-end national supply chain.

Looking ahead at the future of ZEVs?

Given how open-ended the task ahead is, Accelerate management isn’t setting concrete milestones against the creation of its overall strategy. In part this is because of the pace the industry is expected to move during next five years – there are expected to be many new technologies introduced, and efficiencies found, within in the sustainability sector.

It’s even impossible to predict uptake in the electric vehicle sector, because it will be based on both accessibility of the vehicles and infrastructure, as well as affordability.

Fortier is expecting a fair bit of goodwill and momentum from those in the supply chain, but part of the battle is in convincing the average Canadian of its importance.

“I think part of the project here is making Canadians understand the opportunities here too,” he said. “So transitioning from a fossil fuel economy to a zero-emission vehicle space is going to be a big-picture project for Canada, and we need to communicate that it’s doable, that we can actually win in this new economy.”

Seed funding for the initiative has been provided by private charity the Ivey Foundation, Accelerate’s website states. Electric Mobility Canada, The Transition Accelerator, Clean Energy Canada, The Atmospheric Fund and Dunsky Energy + Climate have all provided in-kind funding. Each member organization pays dues and Fortier says the group will be seeking partnerships on various research projects.

“We hope as many people, companies, organizations as possible who see themselves as potential members of the supply chain do turn to us and say, ‘we can be active here and we want to be active here,’ ” Fortier said.

So far, he said the number of calls and emails expressing interest in the coalition has been overwhelming.