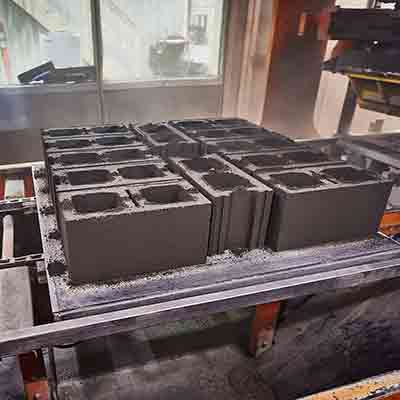 Carbon removal technology company CarbiCrete has received $3.4 million from Next Generation Manufacturing Canada (NGen), for the next stage of its project to develop the world’s first commercially available carbon-negative concrete blocks.

The Montreal-based company’s patented technology allows for the production of cement-free, carbon-negative concrete made with steel slag — a byproduct from steel production — and captured CO2. For every tonne of concrete produced using the CarbiCrete process, 150 kgs of CO2 is removed.

Cement production accounts for about eight per cent of global GHG emissions. CarbiCrete’s website also claims the product results in 10 to 20 per cent lower material costs and 30 per cent more compressive strength than a traditional concrete block.

NGen’s contribution is part of an $8 million project led by CarbiCrete to optimize its manufacturing process at a commercial scale. CarbiCrete’s partners include concrete landscaping designer/manufacturer Patio Drummond and software developer Innovobot Labs.

Founded in 2017, Hamilton-based NGen is a not-for-profit network of over 4,500 manufacturers, technology companies, innovation centres and researchers funding and supporting the scale-up of Canadian manufacturing solutions.

To date, NGen has approved 166 projects with 374 partners, invested $236 million of supercluster funds and leveraged $371 million in new research and development investments by industry. These investments have helped create 18 companies, supported 45 new products and services, and generated $1.92 billion in revenue and licensing deals for the partners involved.

The implementation of CarbiCrete’s process — first developed at McGill University — will occur at Patio Drummond’s precast facility in Drummondville, Que.

“We’ve been working with a variety of different government agencies (since) the company started in 2016,” said Yuri Mytko, CarbiCrete’s chief marketing officer. “We’ve done our research in terms of all the different programs that we could leverage and this was an obvious one, especially given the project was immediately at hand for a new manufacturing process.”

For the past few months at the Patio Drummond facility, CarbiCrete has been producing 500 blocks daily. With NGen’s funding, the goal is to reach 2,500 blocks per day. What Mytko refers to as phase three of the scale-up is aiming for production of 25,000 blocks per day.

The new funding will go toward building more absorption chambers used to inject CO2 into the blocks for curing, instead of the traditional process of using heat or steam. The new curing process takes 24 hours instead of three days.

In April, 2018, Innovobot became the first investor in CarbiCrete. The firm’s role in the partnership is to monitor the data about carbon injection into the blocks to further optimize that process.

Patio Drummond joined with CarbiCrete in October 2018 with the announcement of $2.1 million in funding from Sustainable Development Technology Canada for the facility. While that funding is reserved for the Drummondville facility, Mytko explained CarbiCrete has several other customers interested in implementing the technology at their plants.

“I think it will be largely on the strength of the success of this phase, in which we’re going to allow them to come visit (the facility), then we’re going to move ahead into more contractual relationship(s) with those customers,” Mytko said. “We are already developing some differentiated products for them.”

With the absorption chambers currently being built, Mytko expects increased production to begin by late summer. The blocks will be available on the market before the end of the year.

The future of low-carbon concrete

As CarbiCrete expands, part of its strategy is securing reliable sources for steel slag. Currently, CarbiCrete sources its slag via a global supply agreement with Harsco Corp., which in December, 2019 invested $3 million into the company.

The company is also considering production in Europe. Mytko said CarbiCrete has a potential partner, although the location is dependent on both the steel slag source and a production facility.

“We always say that we see (CarbiCrete) as part of a suite of complementary solutions that are going to help decarbonize the construction industry,” Mytko said. “The kind of goals that are in place, there’s just no way that there’s going to be a single solution.”

CarbiCrete is not alone in the country in its efforts to reduce the carbon emissions from concrete. Another development in low-carbon concrete came via CarbonCure Technologies‘ carbon mineralization concrete mixes.

That product was recently adopted by Butler Concrete for use in municipal projects in Langford, B.C.

In April, CarbonCure landed a $38-million carbon-credit purchase agreement from Invert Inc. and Ripple Inc. As SustainableBiz reported at the time, the Halifax-based company’s mineralization reduces the amount of cement needed in each mix, which lowers the carbon footprint.

Nicholas Sokic Energy RNG Calgary May. 17 2022
Nicholas Sokic Business reporter
Nicholas Sokic is a freelance, Toronto-based journalist. He has covered a number of sectors, including business, finance, crypto, health, cannabis and culture. He graduated from Western University's Master of Media in Journalism and Communications program in 2019.