Green Impact Partners Inc. is developing the Future Energy Park in Calgary — a net CO2-negative b... 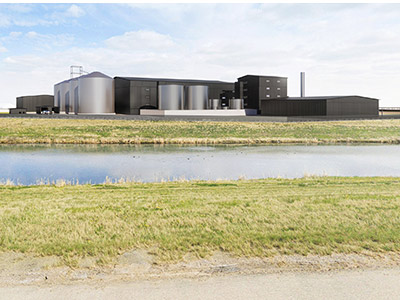 The Green Impact (GIP-X) facility will use non-food-grade wheat to produce renewable natural gas (RNG) and ethanol. Once operational in late 2024 or early 2025, the plant is expected to annually produce approximately 3.5 million MMBtu (one MMBtu is equal to one million British thermal units) of RNG, over 300 million litres of ethanol, approximately 235,000 tonnes of cattle feed and create about 1.5 million tonnes in carbon credits.

“Projects like Future Energy Park get developed where we can effectively decarbonize and create a revenue stream for farmers when they have wasted wheat that doesn’t meet food grade,” said Jesse Douglas, Green Impact’s CEO and also the founder and executive chair of Wolverine Energy and Infrastructure Inc. “We can then make energy out of it and the byproducts we end up making, turn into a high-grade animal feed.”

Green Impact was founded in 2021 and went public on the TSX Venture exchange on June that same year. It came about after the reverse takeover by Wolverine of what was then Blackheath Resources Inc.

“A lot of (the wheat) is wasted via maybe early frost, hail, flood or drought, so anything that is effectively ruined through the process,” Douglas explained, “we would take that and what we do is we actually contract a multiple amount of local large-scale farmers.”

In this instance, all the farmers are located within a couple of hundred kilometres of the facility. Douglas said it will be able to accept 900,000 tonnes of waste each year.

The wheat is first broken down to create the ethanol. The remaining waste material is, through a process of fermentation, digestion and drying, turned into an animal feed.

The company is also considering ways to advance the facility’s future production, including the possibility of accepting City of Calgary’s organic waste. However, those talks are still in the exploratory stages.

“We want to make sure that we’re never putting ourselves at risk where we are overtaking (farmers) and then in order to make the facility produce, we would have to buy food-grade wheat and take food out of that market,” Douglas said. “We don’t want to create something too large and we think there’s a reasonable buffer within the area right now.”

Douglas said at this point, the company has yet to speak to potential buyers for its carbon credits.

During the 24 months of construction, the facility will create about 800 jobs, followed by 50 jobs during operations. The project is forecast to provide direct revenue of over $150 million annually to rural wheat producers.

It will be located on 52 acres of industrial land southeast of the intersection of Peigan and Stoney Trail SE.

According to Douglas it will have a carbon intensity (CI) score of negative 30. CI scores are part of California’s Low Carbon Fuel Standard and are measured in grams of carbon dioxide equivalent per megajoule of energy.

Cost of construction and operation will reach nearly $1 billion. The company has applied for federal and provincial funding, although “the project will be going ahead whether we get it or not,” Douglas said.

The cogeneration plant will be equipped with two 14.4 MW gas turbines, two heat recovery steam generators and two exhaust stacks. It will have a maximum output of 28.8 MW, with about 24 MW of power supporting the facility and any surplus supplied to the local electrical grid.

The plant will also use natural gas supplied by an existing pipeline adjacent to the site.

Green Impact, headquartered in Vancouver, has a growing portfolio of RNG projects under development  —representing over $2 billion in anticipated capital expenditures during the next three years.

The company engaged J.P. Morgan and RBC Capital Markets as lead financial advisors to help accelerate the completion of its near-term RNG portfolio, including the Future Energy Park and an RNG project in Iowa. The Iowa project, expected to commence in late 2023, will produce about 800 MMBtu per day.

Green Impact will also operate an RNG project for GreenGas Colorado LLC, a business incorporated by the state, to begin RNG production this summer and reach full capacity in 2023. By then it is expected to produce over 360,000 MMBtu of RNG per year.