Mangrove Lithium, a producer of battery-grade lithium hydroxide, has closed its latest investment... 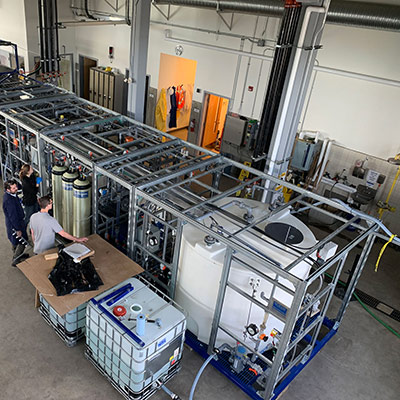 Mangrove Lithium, a producer of battery-grade lithium hydroxide, has closed its latest investment round led by BMW i Ventures (BIV) and Breakthrough Energy Ventures (BEV).

This brings Mangrove’s total funds raised to about $32 million.

The new funds will help accelerate the launch of a commercial-scale plant deploying its proprietary, patent-pending technology to refine lithium for electric vehicle batteries.

Company management has yet to decide on the facility’s location, and is currently considering both Canadian and U.S. options.

“It would depend on customer traction,” said Francisco Velasco Davis, Mangrove’s commercial vice president. “The first plant is going to produce 1,000 metric tonnes of LiOH, and it can be expanded to 3,000.

“Our idea is to use that plant as a demo plant, to work with other customers and show them how the plant works. After that, instead of growing that plant, we will deploy new plants with customers either upstream or downstream.”

Mangrove Lithium’s main technology is a platform that converts lithium chloride and lithium sulfate from a wide variety of feedstocks directly into battery-grade lithium hydroxide (LiOH). The chemical has many uses, but in Mangrove’s case it is employed as cathode material for EV battery production.

Mangrove, which has a pilot facility and headquarters in Vancouver, says it has developed a modular solution can be scaled to any capacity and co-located with lithium producers, or cathode and battery cell manufacturers. The technology is also being commercialized to conversion waste brines to chemicals and desalinated water.

Davis said the “relatively portable” Mangrove platform greatly reduces the carbon footprint of lithium mining, cutting out many steps involved in moving the product along the supply chain.

“Let’s say that you have a mining property in Alberta, and then you need to move that refinery somewhere. You could disassemble and reassemble the plant in around six to 10 weeks,” he said.

The chemical extraction of lithium from sources such as brine, rock and clay is accomplished largely via electrodialysis. Mangrove Lithium’s process, the company says, offers many benefits.

Depending on the source, different byproducts can also be produced which are then utilized in batteries or the production process – such as hydrochloric acid or sulfuric acid.

If brine is the source, Mangrove’s process can extract the lithium directly from the brine, rather than having to use man-made evaporation ponds. This reduces refinement costs by 40 per cent, Mangrove says.

“The problem that we’re trying to solve today is that the traditional route for brines has to go from lithium chloride to (lithium) carbonate, and then it gets refined into the hydroxide,” Davis said. “The problem with doing that using traditional methods is that you are adding more chemicals.”

If the lithium is being extracted from hard rock, Mangrove’s technology allows the lithium sulfate to be directly converted into LiOH. Mangrove uses the same method when extracting from clay.

“For (lithium producers) to have a refinery, it’s a huge capital cost,” Davis explained. “In our case, we can start with a very small module, and we can grow with them and have all the battery supply chain happening in the same country so they don’t have to ship the raw material to China and then ship it back.”

Keeping production costs down is becoming increasingly important as battery raw material costs rise. The International Energy Agency reported in 2021 lithium carbonate prices increased 150 per cent, graphite 15 per cent and nickel 25 per cent in one year.

Previously in 2021, BEV and BDC Capital had invested $10 million in Mangrove.

BEV is a part of Breakthrough Energy, an umbrella organization created in 2015 by Bill Gates and a group of investors. It is comprised of investment funds, non-profits and philanthropic groups aimed at achieving a path to net-zero.

Davis explained part of the reason BIV and BEV invested in Mangrove is due to Canada’s sustainability goals, including its mandate to have only zero-emission passenger vehicles being sold to consumers by 2035.

“Everybody wants to get there, but nobody really has the expertise because this is something new that is happening,” Davis said. “Lithium has been here for forever, but now everybody’s starting to realize that lithium is not (just) a commodity.

“It can be a specialty chemical, and you need refining capacity.”

Nicholas Sokic Waste Nano One British Columbia May. 9 2022
Nicholas Sokic Business reporter
Nicholas Sokic is a freelance, Toronto-based journalist. He has covered a number of sectors, including business, finance, crypto, health, cannabis and culture. He graduated from Western University's Master of Media in Journalism and Communications program in 2019.