Thirteen Canadian companies have been recognized in the San Francisco-based Cleantech Group‘s ann... 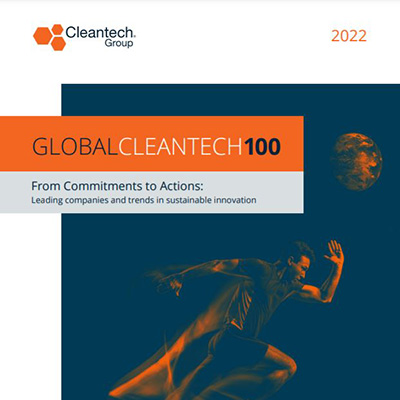 Cleantech Group has released its 2022 top-100 list of private companies making an impact in sustainability. There are 13 Canadian firms on the list. (Courtesy Cleantech Group)

The list is determined by 86 representatives from investors and multinational corporations, the results of over 75 third-party awards which have already been announced and Cleantech’s own analysts.

In total, 10,950 nominations were submitted from over 94 countries. The hundred firms on the list represent $11.3 billion in investment, with 63 companies and $8.7 billion from North America alone.

Forty-one of the companies are in the energy and power sector. Other sectors represented in the rankings include agriculture and food, enabling technologies, materials and chemicals, resources and environment, and transportation and logistics.

General Fusion, along with Ekona, e-Zinc, GHGSat, Ionomr Innovations and Pani Energy are all included on the list for the first time.

“The companies, even more the themes these companies represent, speak to a buoyancy on the solution supply side of the equation,” said Richard Youngman, the CEO of Cleantech Group, in the report. “We have the science and ingenuity to solve most of the issues and there is the investment capital, in both private and public markets, to propel a three-decade transformation to net zero.”

Energy and power in Canada

The list is divided by subsector and not ranked numerically – they are presented in alphabetical order according to their sector.

The first Canadian company to appear on the list is Ekona Power Inc., which is among three Burnaby companies to make the grade. Ekona is a developer of processes for production of industrial-scale hydrogen, clean power and pure CO2. Its patent-pending pulsed methane pyrolysis solution converts methane into hydrogen and solid carbon.

Baker Hughes, an energy tech company based in Houston, invested $3 million into Ekona in November to accelerate development of the process.

General Fusion, the other Burnaby company in this sector, announced this month a critical milestone for its fusion development plant. It claims this will be the fastest and most practical path to commercial fusion energy. General Fusion is also the oldest company on the list, having been founded in 2002.

Ionomr Innovations Inc., at the University of British Columbia is a developer and manufacturer of ion exchange membrane and polymer solutions. In execution, that involves fuel cells, hydrogen production, carbon utilization and advanced energy storage.

This month, it was selected by molybdenum processor and rhenium producer Molymet in Chile to participate in an innovation challenge to develop green hydrogen using rhenium.

The other Canadian company in the energy and power sector is Opus One Solutions in Richmond Hill and Toronto. Its GridOS technology creates digital twins of electricity networks.

Canadian placements in other sections

Under the materials and chemicals section, Montreal-based CarbiCrete’s technology injects slag from steel factories to replace cement as the binding ingredient in precast concrete products. This also sequesters the CO2 within the resulting products.

Carbon Engineering of Squamish, B.C. is featured in Cleantech’s “resources and environment” sector. It is focused on direct air capture technology. This month, Carbon Engineering announced the appointment of Daniel Friedmann as CEO, to succeed Steve Oldham who held the position since 2018.

Also included is CarbonCure, headquartered in Halifax, which has developed a permanent carbon removal technology for concrete. The company’s goal is to reduce 500 million tonnes of CO2 annually by 2030.

GHGSAT, with Canadian offices in Calgary, Montreal and Ottawa, provides satellite-based remote sensors which detect greenhouse gases from industrial facilities. This summer, three of its satellites will launch into orbit on a SpaceX Falcon-9 rocket as part of the Transporter-5 mission.

Meanwhile, MineSense in Vancouver made it on the list thanks to its sensors, which help improve the efficiency of mining operations.

Pani Energy, based in Victoria, provides a cloud-based AI software aimed at improving desalination and wastewater treatment plants for cities and industries.

The Burnaby-based Svante, founded in 2007, captures CO2 from industrial sources at what it claims is half the capital cost of existing carbon removal solutions.

Finally, under transportation and logistics, Montreal’s Effenco electrifies partly or fully heavy duty trucks. It has installed its hybrid electric solution in over 400 trucks as of its most recent update.

Cleantech Group was established in 2002 and also has offices in London, Paris and Boston.