The City of Toronto has set “very ambitious” goals for decarbonization and getting to net-zero gr... 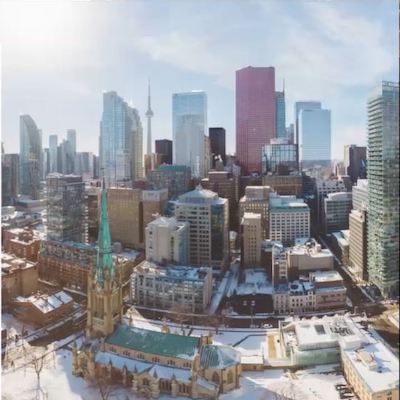 The City of Toronto has set “very ambitious” goals for decarbonization and getting to net-zero greenhouse gas emissions during the next 20 years, senior managers told attendees at an Urban Land Institute (ULI) Toronto district council webinar this week.

The city says community-wide emissions have decreased by 38 per cent from 1990 levels, meeting an initial goal to reduce GHG emissions 30 per cent by 2020.

Cecilia Fernandez, the city’s acting manager of policy at research, called the 2030 target “already very ambitious,” stating Toronto is one of three North American cities to set that goal.

Speeding up the timeline to 2040 increases cost estimates to meet the goal from, “$2.6 billion to make low-carbon investments to a $4.1-billion investment to accelerate to that time period, but it still has to be done,” said Howlan Mullally, Toronto’s manager of corporate real estate.

The economic benefit to all that investment is a predicted savings of up to $90 million per year in utility costs, the creation of two to four thousand new jobs and approximately $6 to $8 billion in GDP growth.

In 2019, the city offered an accounting of its 15.6 megatons of GHG emissions, with 57 per cent coming from buildings, 36 per cent from transportation and seven per cent from waste emissions, mainly from city land.

The reduction strategy is broken down into five broad-based areas:

– demonstrate carbon accountability locally and globally, by establishing a carbon budget for city operations and the community as a whole;

– accelerate a rapid and significant reduction in natural gas use;

The carbon budget will “track climate actions against annual emissions limits to drive that accountability,” Fernandez said, “and during that process will be able to then really hone in on those gaps in action and identify where those solutions need to be proposed and implemented.”

The third step, focused on buildings, requires “accelerating” the city’s Net-Zero Existing Buildings Strategy which was adopted last July. It involves implementing voluntary performance measures and targets for reduction of fossil fuels usage, then transitioning to mandatory requirements in 2025.

One key finding in the buildings strategy is that fuel switching and a clean electricity grid are the most important requirements. It also notes voluntary measures will not be enough, with most actions being made mandatory over time.

“I think there’s going to be a lot of internal and external stakeholder engagement to make this work,” said  Stewart Dutfield, an acting manager at the City of Toronto.

A separate plan would focus on reducing 80 per cent of emissions in over 2,500 city-owned buildings by 2040.

Finally, the fourth version of the Toronto Green Standard (TGS) will aim to “all but eliminate the use of natural gas in new buildings” and comes into effect May 1.

Toronto Green Standard and other goals

The TGS is a set of performance measures for new sustainable development. It is updated every four years.

Part of the new TGS includes the removal of parking minimums, which according to Lisa King, a senior planner with the city, will cut down on embodied carbon related to developments. It also includes 100 per cent EV integration for indoor residential parking and 25 per cent for non-residential.

“The other aspect that we’re really exploring right now is understanding up-front embodied emissions, so we have two studies under way right now,” King said, “one related to construction and the other with large buildings. We’re concerned that it actually starts to overtake emissions from building construction.”

The plan to meet the 2030 targets means all new buildings must be built to near-zero GHG emissions, while GHGs from existing buildings will have to be cut in half from 2008 levels.

As well, the aim is for 50 per cent of community energy to come from renewable or low-carbon sources and 25 per cent of commercial and industrial areas be connected to low-carbon thermal energy sources. For transportation, the objective is for 75 per cent of school or work trips under five km to be walked, biked or via transit, and 30 per cent of registered vehicles to be electric.

As part of the low-carbon transportation options, the TTC’s Green Bus program targets making 50 per cent of the bus fleet zero emission by 2032.

The city’s 2030 targets also include zero waste for its own facilities, and a 25 per cent reduction in GHG emissions from food the city procures.

“We know the city corporation itself only produces five per cent of the emissions and 95 per cent come from the community, so we know that we have an enabling role to play,” Fernandez said.

The webinar was moderated by Kirk Johnson, the president of Eco-Efficiency Consulting.