The group of companies collectively known as Dream has officially launched a multi-million-dollar... 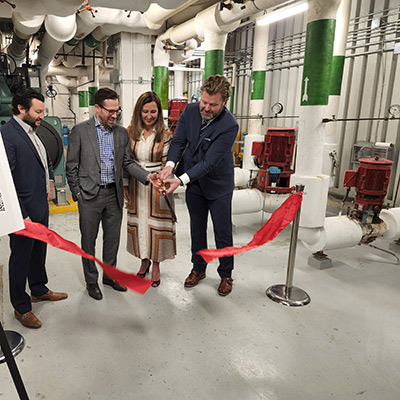 The group of companies collectively known as Dream has officially launched a multi-million-dollar program to retrofit 19 Toronto and Saskatoon buildings within its portfolios.

Dream is made up of Dream Unlimited Corp. (DRM-T), Dream Industrial REIT (DIR.UN-T), Dream Office REIT (D.UN-T), Dream Impact Trust (MCPT.UN-T). It has $16 billion in assets under management across these four trusts.

To mark the occasion, Dream hosted a ribbon-cutting and education ceremony at its 36 Toronto Street office tower location.

Part of the retrofits will be funded by a $136.6-million investment from impact investor Canada Infrastructure Bank (CIB) as part of its Commercial Building Retrofits Initiative. Dream is the first real estate and development company in Canada to receive funds under the initiative.

“We can now fast track the decarbonization of these buildings, and deliver on our commitments that much better. This really is an incredible spectrum of buildings we are (de)carbonizing,” said Gordon Wadley, Dream REIT’s COO, at the program launch.

“They range from historical boutique buildings and part of the financial core to large high-rise commercial towers. In fact, the oldest building we’re retrofitting was built in 1908.”

Eighteen of the buildings are in Toronto and one is in Saskatoon. The goal is to reduce carbon emissions from the buildings by 40 per cent during the next 36 months.

Expected to create 1,500 jobs in the process, Wadley said this will create “healthier workspaces” for over 15,000 people.

Part of the launch included a look at the mechanical room inside 36 Toronto. Lee Hodgkinson, Dream’s head of sustainability and technical services, said most of the retrofitting at that property would be done in that room.

“In this room alone, you will see about 80 per cent of the GHG emissions from this building,” he said.

In particular, he pointed out the air handling unit, which he explained accounts for about 20 per cent of GHG emissions of a typical building.

The key for Dream, according to Hodgkinson, is to figure out exactly how much fresh air each building needs, then install sensors to monitor usage and provide only the amount that is required, thus saving energy.

Dream’s first priority in the 19 buildings is any system which is consuming natural gas. Next is automating more of the energy services, like demand control ventilation.

“We use that hierarchy really specifically because we can’t just go straight to offsets, that’s not going to be meaningful or have longevity in today’s market,” Hodgkinson said.

The aim is to use only Certified Gold Standard, Verified Carbon Standard or an equivalent. As well, the offsets will be limited to 10 per cent of baseline emissions.

As for why Dream chose these buildings, Hodgkinson said it had been studying its portfolio for a while and it came down to answering the question, “Where can we go far and fast?”

The company’s net-zero report, published two weeks prior to the launch, details its GHG emissions and energy usage across its portfolio.

A third-party assessment from Purpose Building Inc. revealed heating is responsible for the majority of GHG emissions and energy usage across Dream’s office, multi-residential and industrial units.

By 2025, it plans to reduce carbon intensity by 20 per cent for the eligible buildings in its portfolio. By 2030 that target is 50 per cent.

The Zibi Community Utility at its master-planned 34-acre development in Ottawa and Gatineau, is included as a case study in the report with Dream’s intention to leverage knowledge gained at that project for its other assets.

Dream secured the CIB funding in November, and spent the interim months selecting and finalizing the planning for these retrofits. Ehren Cory, the CEO of Canada Infrastructure Bank, said at the launch it chose to partner with Dream because of the firm’s “commitment to public good.”

He also mentioned by the end of May, CIB would have made seven investments in the building retrofit space. The bank’s contributions in that sector are in the range of $700 million.

In order to utilize all of the funding, Dream is required to complete all 19 retrofits in five years. Hodgkinson acknowledged it might not all get done during that time frame, given the scale of the projects as well as the fact that these buildings will remain occupied during the process.

Ana Bailão, Toronto’s deputy mayor, was also present at the launch. She reiterated the city’s 2040 net-zero goal, starting with a 45 per cent reduction from 1990s levels by 2025.

The full list of buildings to be retrofitted includes:

– The Residences at Weston Common; and

Dani-elle Dubé Energy Zibi Ottawa May. 12 2022
Nicholas Sokic Business reporter
Nicholas Sokic is a freelance, Toronto-based journalist. He has covered a number of sectors, including business, finance, crypto, health, cannabis and culture. He graduated from Western University's Master of Media in Journalism and Communications program in 2019.