‘ESG is very much here to stay’: GPM panel 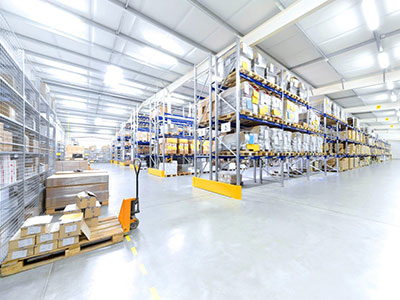 An EnerSavings warehouse filled with its available products. (Courtesy EnerSavings)

The online program — which originated with EnPowered — is known as the EnerSavings Hydro Helper (On-Bill Program). Some of the services offered by the program can include installing LED lights, upgrading HVAC systems and improving water meter accuracy.

It removes the upgrade costs from a building’s CAPEX (capital expenditure) ledger and puts them on the utility bill — making it an operating expenditure — with no upfront costs. Because of this, the monthly fee for the upgrades is less than the savings from the new installations, according to EnerSavings’ CEO and co-founder Kevin Lisso.

The company gives an example of how this may work in practice with a hypothetical building that has a monthly electrical bill of $10,000. The building can transition to LED lighting without the need for upfront cash. Its managers will pay $4,000 monthly on their electricity bill to finance the switch, but the installation of the LEDs actually saves $6,000 a month per the calculations EnerSavings would make in this scenari0. Therefore, the new monthly cost for electricity is $8,000 — a savings of $2,000 per month.

“A lot of companies after what has happened with COVID, they’ve had to push their CAPEX and had to push their budgets, because the money’s just not there,” Lisso said. “They’re getting back their feet back on the ground again, and so they’d love to make this investment of 100 grand and save 50 grand a year, but they don’t have the money.”

He also mentioned the possibility of rebates as well as receiving carbon credits as a result of lowered greenhouse gas (GHG) emissions. The billing doesn’t start until the project’s installation is complete.

Lisso founded EnerSavings in Toronto in 2018 with COO Navi Salaria. Currently, the company employs around 85 people in Canada and another 30 to 35 people in India. It is present in B.C. and Alberta as well, and is expanding into Quebec.

EnPowered was founded in 2015 in Waterloo, Ont. The original name of the program is EnPowered Payments, available in Ontario, Ohio and New York.

EnerSavings reached out to them about nine months prior to developing the program together. From there the companies did their due diligence on each other and figured out if the program would actually work.

According to Lisso, around 50 per cent of the company’s clients finance and the other 50 per cent pay in cash. Of those that finance, 40 per cent are clients that will adopt the program for their own use. He also said most of EnerSavings’ clients so far were receptive to the program.

“There are many companies going through the pre-recession stage,” Salaria said. “They’re saying, ‘There’s no need to spend this money, but just keep your ledgers invested somewhere in-house to generate more revenue.'”

A similar example would be applied for the program to install automated HVAC systems from EnerSavings, or its WaterGater Valve, which compresses the air in the water line, making water meter readings more accurate and ensuring businesses are only paying for the water they actually use.

Lisso said EnerSavings’ LED products — which he calls their “bread and butter” — can achieve a 65 to 70 per cent reduction in lighting costs, while for water meters and HVAC the reduction is between 25 to 30 per cent. The company says its retrofits help reduce energy bills by up to 75 per cent while lowering GHG emissions.

Future of the program

“What we’re doing now is we’re educating. They’re going to want to see results, right?” Lisso said. “So if we can show over the next six to 12 months, that there was a decent volume there, it’s running nice and smooth, everything is working as planned, the numbers and the volume of business keeps going up, then we can go to these utilities in the different provinces.”

Nicholas Sokic Energy Carbon Ontario Jun. 22 2022
Nicholas Sokic Business reporter
Nicholas Sokic is a freelance, Toronto-based journalist. He has covered a number of sectors, including business, finance, crypto, health, cannabis and culture. He graduated from Western University's Master of Media in Journalism and Communications program in 2019.