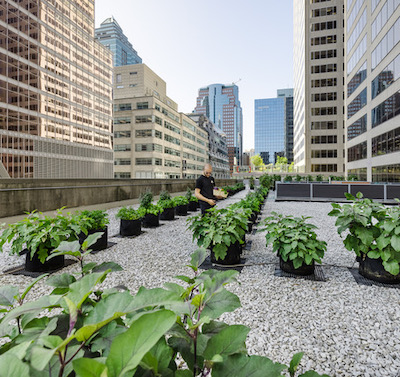 The urban garden at 2001 Robert Bourassa Blvd., in Montreal was created in collaboration with the building’s largest tenant BNP Paribas and MicroHabitat. This won GWLRA the Stakeholder Engagement award at the HOOPP LEAP Awards. (Courtesy GWLRA)

First launched in 2012 by the Healthcare of Ontario Pension Plan (HOOPP), the Leadership in Environmental Advancement Program (LEAP) awards are meant to recognize the HOOPP’s property managers and tenants for excellence in areas such as sustainability innovation and community impact.

“We think the more we can do to protect our buildings, it’s generally beneficial to our owners and our tenants, but also to the community at large, the more resilient the community is,” said Krystian Imgrund, the director of corporate sustainability at GWLRA.

With head offices in Toronto, GWLRA has over $18 billion in assets under management across 254 properties and 46.9 million square feet of commercial space, including office, industrial, retail and multi-residential assets. The majority of its portfolio is in office buildings at 35 per cent.

This was accomplished via collaboration with the Montreal-based MicroHabitat, which works to establish urban gardens in residential, commercial and industrial properties. Beehives were installed by a separate company, Alvéole — with Canadian offices also in Montreal.

As Imgrund explained, the two elements work hand in hand, as the urban garden provides pollen required by the bees.

“BNP Paribas did it as a project to make use of some rooftop space . . . for their benefit, so that’s where the stakeholder engagement came in,” Imgrund said. “They were the first, or one of the first, to do this. It’s something that a lot of our buildings decided to participate in over the past year-and-a-half or so.”

The produce harvested in the urban garden amounted to more than 1,000 pounds of food and was donated to a local food bank. The 10.18 kgs of honey from the beehives was distributed among the users of the building.

Other benefits include managing rainwater runoff and reducing the heat island effect of the building.

Along with 2001 Robert Bourassa, one other Montreal building and 11 buildings in the GTA in GWLRA’s portfolio were outfitted with MicroHabitat urban gardens in 2021. This initiative contributed more than 5,500 pounds of fresh food to six local food banks.

GWLRA’s second recognition from HOOPP was via the Climate Leadership Innovator award.

Last year, the company partnered with a third-party risk analytics firm to complete a natural hazard and physical risk exposure assessment for all its assets, including those managed by HOOPP. The assessment covered 20 natural hazards and climate-related events and included scenario analyses of climate change projections between 2045 and 2070 under three climate-warming models.

“This clearly falls in the adaptive approach,” he said. “In other words, what we put into the atmosphere we’re trying to reduce, so we are trying to mitigate the impact; and then this is what climate change is going to thrust upon us, and we’re trying to adapt to that.”

The company plans to use these risk models as part of its evaluations of potential acquisitions.

“Prior to acquisition or an investment in a particular property, we do apply a climate-change or resiliency lens to that activity,” Campanelli said. “It’s oftentimes we’ll go beyond the risks associated with those hazards, and then look at the manner in which the broader site, perhaps the municipality, is also working in concert to ensure a strong adaptation.”

GWLRA has pledged to operate a net-zero emissions portfolio by 2050. Imgrund said the action plan to reach that goal is still in the early stages of development.

According to its 2021 annual review, since 2013 GWLRA has reduced the carbon intensity of its portfolio by 34 per cent, representing 51,408 tonnes of carbon dioxide equivalent (CO2e). By the end of 2021, its carbon emissions intensity stood at 4.01 tonnes of CO2e per 1,000 square feet.

Additionally, 86 per cent of its eligible portfolio by floor area had at least one green building certification, representing 37 million square feet.

Eighty-four per cent of its offices have achieved a BOMA Best Gold certification. BOMA is Canada’s largest environmental assessment and certification program for existing buildings.

GWLRA submits annually to the Global Real Estate Sustainability Benchmark (GRESB). In 2021, the company earned a Green Star ranking for the seventh year in a row and its fifth consecutive 5-Star rating.

“A lot of times people use the term ‘leap of faith.’ (The net-zero goal involves) revealing what that target is for ourselves and what that means and then building a plan outside of that,” Imgrund said. “It’s a tall order for absolutely everybody . . .  across every industry.

“But a journey of a million miles starts with a single step, so that’s where we’re at.”