Dans la rue is a non-profit dedicated to helping homeless and at-risk youth. It is also doing its... 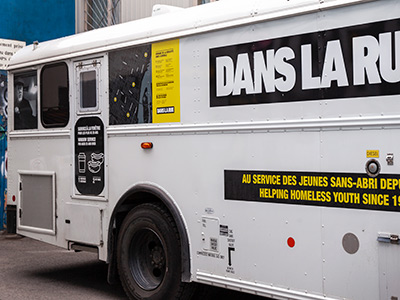 Dans la rue is a non-profit dedicated to helping homeless and at-risk youth. It is also doing its part for the environment, introducing what it believes is Montreal’s first vehicle to run entirely on renewable natural gas (RNG).

The vehicle travels a 20-km nightly route through the Hochelaga-Maisonneuve, Plateau Mont-Royal, Centre-Sud and downtown neighbourhoods each Monday through Friday. The route covers an area within a 45-minute walk to Dans la rue’s youth centre.

“We don’t go that far (with the van) every night and we do the same stops… so the diesel engine was not for us and for the environment, it was really not good,” said Alexandre Des Groseilliers, Dans la rue’s van coordinator. “We listen to the youth that we are helping, and they really have the same mentality; to be cleaner and to be good with the environment.”

The van’s launch was marked by a ceremony presented by CN and Sun Life. Dans la rue also raised $200,000 to mark the occasion.

RNG is created when organic waste is broken down. Capturing the gas for fuel avoids methane emissions from the waste which would normally be left to rot in landfills. In this case, the RNG is produced via biomethanation, during which organic material is microbiologically converted to biogas.

The van was supplied by Énergir, the largest natural gas distribution company in Quebec. The company’s RNG comes from a variety of North American producers including three sources in the province — Warwick, Candiac and Saint-Hyacinthe.

The van holds the equivalent of 340 litres of diesel fuel. One DLE of compressed natural gas (CNG) or RNG contains the same amount of energy in Joules, or British thermal units, as one litre of diesel.

There were no modifications needed to the energy source as the vehicle was ordered on a new bus chassis directly from the manufacturer, equipped with a natural gas engine and CNG storage tanks.

The van includes a hydraulic generator and its interior contains a steam cooker, sandwich press, microwave oven, heating and air-conditioning systems. It can also accommodate 15 to 20 people inside.

Dans la rue first became interested in transitioning to RNG five years ago, although the process was hampered somewhat by the pandemic.

Among its partners in developing the RNG van were the Aldo Group Inc., Énergir and the Marcel and Jean Coutu Foundation (FMJC).

Des Groseilliers said Aldo, which is based in Montreal, has been a partner with Dans la rue for years and has a group of volunteers who assist with the van every two weeks. Aldo hosted a cycling challenge in 2019 which raised over $100,000 to help fund the van.

The FMJC, a private family foundation established in 1991 and another longtime partner, provided $250,000 over five years to cover the operating costs of the van and the purchase of hygiene products for youth.

For development of the van itself, Dans la rue reached out to Énergir, and “they immediately agreed.” An Énergir facility is just a five-minute drive from Dans la rue headquarters, making for easy refuelling.

“They gave us five to six people to help us with the project at every step, to take the blueprints and (check with the operation). They are still there after because it’s not just delivering the bus, it’s helping us with everything that comes after,” Des Groseilliers said. “If we need someone to take the engine or the generator we just call them and we have an appointment in five minutes.”

Dans la rue was founded by Father Emmett “Pops” Johns, who purchased a used motor home and used it to distribute food and clothing to street youth. Over time, the scope of the non-profit grew to include an overnight shelter and permanent housing.

According to the organization, those in the van serve more than 18,750 hot dogs and other non-perishable foods annually to an average of 110 people every night. This is accomplished by over 160 volunteers and 75 employees. The organization operates in both English and French.

Nicholas Sokic Energy RNG Calgary May. 17 2022
Nicholas Sokic Business reporter
Nicholas Sokic is a freelance, Toronto-based journalist. He has covered a number of sectors, including business, finance, crypto, health, cannabis and culture. He graduated from Western University's Master of Media in Journalism and Communications program in 2019.