The Ken Soble Tower in Hamilton has become the world’s largest residential building certified to... 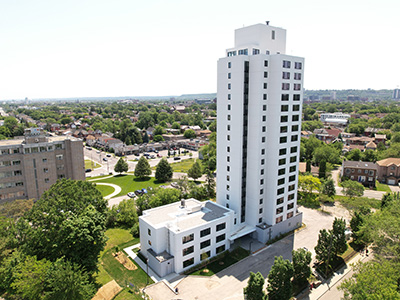 The Ken Soble Tower in Hamilton has become the world’s largest residential building certified to the Passive House EnerPHit standard, the first retrofit of its kind in North America.

The 18-storey, 146-unit and 80,000 square feet CityHousing Hamilton (CHH) building for affordable seniors’ living has achieved a 94 per cent reduction in greenhouse gas emissions and a 91 per cent reduction in heating energy demand.  At its peak, the energy required to heat and cool a unit would be equivalent to the energy needed to power three incandescent light bulbs.

The EnerPHit standard for existing buildings was developed by the Passive House Institute to take into account the limitations within these structures, such as unavoidable thermal bridges. Thermal bridging, often a major source of energy loss in buildings, describes the movement of heat across an object which is more conductive than the materials around it.

The retrofit was carried out by Edmonton-based PCL Constructors Canada Inc., in consultation with Toronto-based ERA Architects Inc., a firm that specializes in low-carbon retrofits. ERA had been contracted by the CHH in January 2017 to lead the project, and the retrofit was completed in June 2021.

Goals and challenges of the retrofit

It is a timely project because in nearby Toronto, Version IV of the incoming Toronto Green Standard states every new public building in that city must be net-zero. So, although the Ken Soble tower retrofit isn’t subject to those regulations, ERA principal Graeme Stewart sees it as an example of what can be accomplished.

“We’re working with other public authorities who are saying, ‘Oh my God, how do we do this?’ And then we can actually point to Ken Soble,” Stewart said. “Suddenly, instead of a scary unknown, this is just something you can do.”

The Passive House standard was created in Germany, incorporating what Stewart calls “a comfort-driven standard”. One distinct challenge in comparison to other standards in use in Canada is that the interior surface temperature of glass can’t drop below 19 Celcius.

For this retrofit, 2050 temperature predictions were a “guiding foundation” on the design.

Some of the improvements to the tower under the EnerPHit standard include exterior and interior insulation that meets air-tightness requirements, triple-glazed windows and heat recovery in all building penetrations. Obsolete HVAC systems have been modernized and 20 per cent of the suites meet barrier-free standards which Lori O’Malley, the building envelope engineering specialist at PCL, characterizes as “balancing thermal comfort and energy consumption.”

She noted living up to the standards meant more regulatory checks and approvals prior to construction. Jonathan Rodrigues, a project manager with PCL also stated “quality management” for Passive House is at a much higher percentage compared to other certifications.

“We’ve said this before, that you can make a green building terrible to live in. We’ve actually seen that in the early days. ‘We want to save energy so we’re just going to turn off our ventilation system.’ It’s almost punitive for residents,” Stewart said, noting that is no longer the case for such projects.

All three estimate about 60 to 70 per cent of the project was focused on building renewal. For example, opening up the walls to upgrade the plumbing and finding discontinuity between the walls.

In O’Malley’s case, the biggest risk was in air-tightness requirements, which are usually solved at an assembly level. Being a retrofit, this wasn’t possible.

“Like all retrofits and renovation projects, there was lots of surprises,” O’Malley said. “It has so many benefits that weren’t originally planned for, that ended up coming into fruition as a result of the good construction practices and good design that went into it.”

The companies behind the retrofit

The tower is the oldest high-rise multiresidential building in CHH’s portfolio, having stood at 500 MacNab Street North in Hamilton’s West Harbour neighbourhood since 1967. The building was fully occupied until 2014 when it fell into disrepair due to aging infrastructure and increasing capital costs.

Thanks to the retrofit, the Ken Soble Tower will be the subject of a two-year study between CHH, ERA, PCL and a University of Toronto civil engineering team. They will study and measure the impacts of the building on its residents and surrounding environment including building performance, resident health and safety, and economic impacts, among others.

“A lot of it is coaching people through that first year. And then the second year, is to make sure that we have data that shows hopefully, when everything’s just running like clockwork, just what does that look like?” Stewart said. “How are these units designed to these new standards working for the people who are occupying them?”

According to O’Malley, many new construction projects are incorporating some Passive House principles even if they’re not trying to achieve certification. Examples include higher performing windows, minimizing thermal bridges and airtight construction.

“If I had one sort of lesson to share with the (construction) community, it’s to just demonstrate that it’s not as hard as it seems to be, and that Passive House projects are in fact attainable,” said O’Malley.

CHH commenced operations in 2006. It provides housing to families, seniors, couples, single people and people with special needs in a variety of housing forms including townhouses, apartments, single and semi-detached dwellings. Most of the housing is available on a rent-geared-to-income basis.

ERA Architects has been in practice since 1990 and has over 85 employees in Toronto, Montreal and Ottawa. For Quebec projects, the firm collaborates with Kubanek Architecte.

PCL was founded in 1906 with its U.S. head office in Denver, Colorado, and other offices in Australia and the Caribbean. The company employs over 9,500 with an annual construction volume of $8 billion.

Nicholas Sokic ESG LEED Edmonton Jan. 10 2022
Nicholas Sokic Business reporter
Nicholas Sokic is a freelance, Toronto-based journalist. He has covered a number of sectors, including business, finance, crypto, health, cannabis and culture. He graduated from Western University's Master of Media in Journalism and Communications program in 2019.