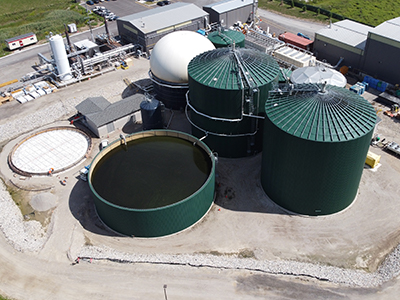 Anaerobic digestion is the process by which bacteria breaks down organic matter in the absence of oxygen. RNG is one of the results of this process.

Modern Niagara provides mechanical, electrical and integrated building technology services. The RNG provided by StormFisher will be available to Modern Niagara’s customers. As well, the company has committed to reducing the carbon footprint from its buildings’ energy consumption by 30 per cent by the end of 2022 compared to 2019 levels, mentioning in a statement it would use RNG to do so.

To do this, the Ottawa-based company reached out to StormFisher, which produces the gas and then injects it into existing distribution systems.

The agreement took about a year from first contact to come to fruition. The companies have agreed on the volume of RNG to be delivered, although details of the contract have not been publicly revealed.

“We are looking forward to working with StormFisher to enhance our sustainable service offerings. This partnership will allow us to offer an effective greenhouse gas reduction solution to our clients, helping them reach their sustainability goals and in turn reduce the negative impact that buildings have on the environment,” said Modern Niagara’s COO Chris Hill in a statement on the partnership.

The London facility was built in 2012, and is owned by Generate Capital, PBC, a diversified sustainable infrastructure company based in San Francisco. Generate Capital partnered with StormFisher to scale Canadian biogas production.

Moffatt explained the facility is also an important part of the London Economic Development Corporation’s efforts to attract new food processors to the region. He cited Maple Leaf Foods Inc.’s value-added poultry processing plant, scheduled to be completed by late 2022, as an example.

“We’ll take their byproducts from processing and for organics, that otherwise could have gone to the landfill, and we divert them and bring them into our facility in London to start a circular journey,” Moffatt said. “We then digest those materials in large tanks, sort of like an industrial cow, and we create biogas.”

Moffatt explains the company’s process yields a gas that is 60 per cent methane. Post-digestion, the leftover material can be used as an organic fertilizer by farmers. The RNG produced is wholly compatible with existing natural gas infrastructure.

“You can’t get to net-zero if you don’t have negative fuels to balance out the positive fuels. And so, if we’re using ethanol or other renewable fuels, then they’re decreasing the carbon intensity of gasoline and diesel or natural gas,” Moffat said. “But at the same time, you still have to have negative fuels, because your net-zero is a balance. That’s where our type of fuels (come in).”

Other facilities and future partnerships

StormFisher has a resource recovery centre in Drumbo, Ont. which processes the organics and packaged food waste to supply anaerobic digesters.

The company also has four digesters in the U.S., together serving over 65 customers.

One of its earliest adopters was FortisBC, an electricity and natural gas distribution utility. According to a Toronto Star interview with Moffatt in July, 2021, Fortis receives about 20 per cent of its RNG from StormFisher — or about 150,000 gigajoules per year.

While StormFisher has plans for similar partnerships in the future, Moffatt declined to expand on the specifics. However, he did say the company is contacted “by like-minded parties on a regular basis that are trying to do something similar.”

“We’re building additional infrastructure in Ontario, but also other provinces and states,” said Moffatt, who is also a board member of the Ontario Environment Industry Association (ONEIA).

“We have continued to seek out partnerships or relationships with other stakeholders and look to expand our relationship with the modern (agriculture) folks, as well as our other customers.”