The inaugural Sustainable Property Technology Report has revealed just over $326 million in inves... 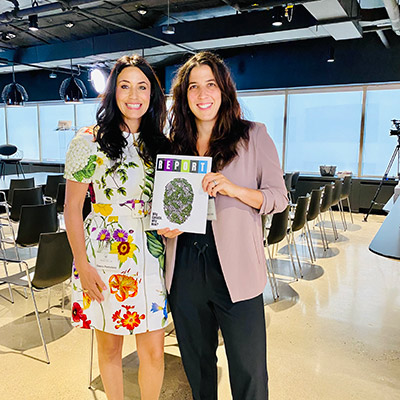 Authors Deena Pantalone and Joanna Creed at a launch event for the report at the IBI Smart City Sandbox in Toronto. (Courtesy Venturon Ltd.)

The inaugural Sustainable Property Technology Report has revealed just over $326 million in investments for sustainable construction tech in Canada — and nearly $1.5 billion in funding across all proptech industry sectors.

Other sectors included in the study are smart cities, asset management and research/analytics. Smart city companies garnered the lion’s share of the funding compiled in the report, at just over $900 million.

The report was produced by Venturon Ltd., an investment group focused on real estate technology startups headquartered in Concord, Ont., as well as Sustainable Proptech Canada.

Its authors include Deena Pantalone, the founder and managing partner at Venturon, and Joanna Creed, Venturon’s director of operations and general counsel. They also founded Sustainable Proptech Canada, an industry think tank, in 2021.

“We were doing particular research on net-zero housing. We saw there were some gaps in the marketplace in terms of where to find information. Where does the developer go for the information? How do they know where to invest, in what companies?” Pantalone told SustainableBiz.

“Then in speaking with our advisors from PWC and Scotiabank, they suggested that we start a sustainable proptech community. Why don’t we share the research and reports and canvas experts (and) thought leaders nationally? So then I just spread my net a little bit in terms of capturing several different sectors.”

The other authors are Nikita Choudhari, an international MBA candidate at the Schulich School of Business, and James McKellar, a professor at Schulich’s Brookfield Centre in Real Estate and Infrastructure.

The report consists of dozens of interviews with technologists, investors and property professionals in the space. The data included is accurate up to March 1 of this year. Subsidiaries of larger corporations were omitted.

“Throughout the research and interviews, we had these recurring points that came up (and) we’ve formulated a thesis of, Canada punches above its weight in terms of the real estate industry,” Creed said. “Some of the biggest corporate real estate companies in the world are based here . . . We’ve got a population that’s tech-enabled, for lack of a better term.”

The authors discovered about 66 per cent of Canadian proptech startups were founded after 2016.  Out of the 68 companies interviewed, sustainable construction made up the largest category at 23 — eight of which were founded during the past five years.

The majority of proptech companies are located in Ontario at 36, followed by B.C., Quebec and Alberta. Similarly, just over a billion dollars in funding is located in Ontario, with Alberta, B.C. and Quebec behind.

“I don’t think it’s a flash-in-the-pan trend, I think the current economic climate has resulted in a slowdown, kind of everywhere. But I think the successful proptech companies will survive that,” Creed said. “I also think it’s going to allow people to investigate proptech and sample projects because yes, green technologies can be slightly more expensive today (but) those costs are coming down with each advance and technology.”

There is some pushback to the enthusiasm in the report, with McKellar writing, “Given Canada is a relatively wealthy country with high levels of education and a skilled workforce, one might expect us to be a leader in PropTech, but we are not yet there.

“We look to Europe. Why? The answer is in the underlying personal values and political mandates these societies have adopted to move quickly into a carbon-free world.”

At the same time, part of the report focuses on the regulatory crackdown coming to Canada, as has already begun in Europe. Creed stated there’s unlikely to be a way around such regulations, and that many real estate companies in Canada are taking a proactive approach to the inevitable.

Pantalone singled out Toronto-based real estate investment company KingSett Capital — with $20 billion in assets — as an example of a proactive company. Both, however, stressed all the companies included in the report are “inherently progressive” by nature of their presence in its pages.

In his interview with the authors, KingSett CEO Jon Love explained the company regularly issues “problem briefs” so vendors can suggest solutions by finding new technologies.

Sidewalk Real Estate Development in Dartmouth, N.S. was also highlighted as an example of a smaller company that’s “doing some pretty impressive stuff,” as Pantalone put it. The developers’ work on the Shuffle, a former hotel designed into 79 micro housing units with  ground-floor retail, was featured in the report.

There’s also mention of the green initiatives in Canada, such as the Emissions Reductions Plan and the Toronto Green Standard. Yet the report states Canada’s most important sustainability legislation is its carbon pricing system.

“These carbon markets have added even more tailwinds for technologies that help with the accounting and reporting of emissions,” the report reads.

In the course of the interviews Pantalone noted a dramatic change, “especially in the solar sector,” in regard to developers, builders and landlords implementing green technologies.

There is also a sea change in attitude across Canada.

The report cites a study showing 81 per cent of Canadian investors consider ESG factors as part of their investment decisions. Another study cited says 64 per cent of millennial workers won’t take a job if a company doesn’t have strong corporate social responsibility policies in place.

“Don’t be afraid of the adoption and evolution of improving your portfolios, whether that’s in a housing community, or it’s an industrial portfolio,” Pantalone said.