CHAR Technologies Ltd. has begun the first phase of its work on the Thorold renewable natural gas... 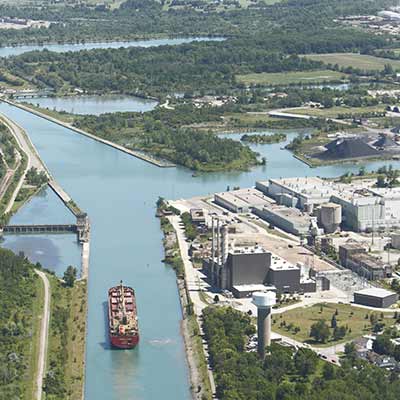 An aerial view of the Thorold Multimodal Hub, where CHAR Technologies will be building a new HTP facility. (Courtesy HOPA)

CHAR Technologies Ltd. has begun the first phase of its work on the Thorold renewable natural gas (RNG) and biocarbon project at the Thorold Multimodal Hub to sustainably transform scrap wood into fuel.

Once operational, the project will produce RNG and biocarbons converted from woody feedstocks that would otherwise be destined for landfills.

“We’re not a waste processor. We need to control and understand what our feedstock streams are to make high-quality gas and high-quality carbon,” said Andrew White, CHAR’s CEO.

“When we talk about wood residuals, it is stuff that would potentially go to landfill, but it’s still a clean stream. Think of end-of-life shipping pallets. That’s a fairly clean wood that ultimately needs to find a good home.”

CHAR (YES-X) plans to move into the Hub around October to begin phase one production by December. Phase two will see the company producing 10,000 tonnes of biocarbon each year by the end of 2023. By mid-2024, CHAR will add RNG capabilities that, once fully implemented, will produce 500,000 gigajoules of energy per year.

Based on the product outputs, White said the annual greenhouse gas (GHG) reductions amount to 30,000 tonnes per year – equivalent to removing about 6,500 gas vehicles from the roads.

The project will be supported by the Natural Gas Innovation Fund (NGIF) and Bioindustrial Innovation Canada (BIC). NGIF is a venture capital firm that provides grant and equity financing for startups facing environmental challenges in the natural gas sector. BIC is a Sarnia, Ont.-based non-profit accelerator for developers of sustainable technologies.

White said phase one of the project involves rehabilitating the wood room on the hub site — where incoming wood was ground into pulp and paper. It also includes moving its existing London, Ont. facility to the Thorold location.

The Hub is a complex over 250 acres in size for multi-user warehousing, transloading and development space which offers marine, rail and highway access.

“We looked at the site and the location is great,” White said. “It’s on the Welland Canal, there’s rail, there’s roads, so for moving feedstocks and materials, for bio-coal, that’s much closer to the Hamilton steelmaking area than London is and again, it’s got that ability to expand.”

The new project at the Hub will utilize high-temperature pyrolysis (HTP), a technology CHAR is already familiar with.

HTP involves woody material being placed into an airless cylinder where pyrolysis can occur; it’s a process White previously described to SustainableBiz as “heating (materials) up in the absence of oxygen.” The materials are heated indirectly from burners outside the cylinder, so no flame touches the biomass materials.

A thermal, chemical conversion then occurs, breaking down the material into a gas and a solid. The solids are biochar and bio-coal, which can be used for carbon offsets or to help decarbonize the coal and steel industries. The gas, which is rich in hydrogen, can be extracted or taken through methanation to create renewable natural gas.

CHAR’s feedstock supplier for the Hub is the Niagara Falls-based Walker Industries, which is involved in the construction materials and services, emulsions, organics recovery, waste services and renewable energy sectors.

Customers from the Hub project will be split between those in heavy industry that require the bio-coal and biochar, and those looking to buy carbon credits on voluntary carbon markets once the biochar has been sequestered in the ground. CHAR considers itself agnostic when it comes to particular markets, although White mentioned Puro.earth as one the company is most familiar with.

“We will be doing a combination of (biochar and carbon credits),” White said. “The exact split will be based on who signs up for the right contracts and the like, but we’ve got some pretty well-advanced conversations on where all of those outputs are going and before the plant is in operation will have those finalized.”

White co-founded CHAR as a result of his graduate thesis research at the University of Toronto while earning his masters degree in chemical engineering in 2010. He also has a masters in business, entrepreneurship and technology from the University of Waterloo.

The company’s plans to build, own and operate an HTP facility in Saint-Félicien, Que. have been progressing since SustainableBiz first reported on it in February. White revealed the city achieved funding for its waste heat recovery hot water loop — a key part of the supply chain for the eventual HTP process and a step White said is “a really positive sign.”

He also reiterated that, while he keeps up to date with other renewable sectors like solar and fusion, the company will remain focused on its biochar and HTP specialties.

“We’re able to make a product that can be used as the replacement of coal, so we can still make steel to have buildings and bridges and all the great stuff that steel is used for,” White said. “Helping that industry decarbonize, it’s really the biggest opportunity to meet net-zero goals, is to help some of the heavy and industrial sectors decarbonize.”

Nicholas Sokic Waste StormFisher Ontario May. 16 2022
Nicholas Sokic Business reporter
Nicholas Sokic is a freelance, Toronto-based journalist. He has covered a number of sectors, including business, finance, crypto, health, cannabis and culture. He graduated from Western University's Master of Media in Journalism and Communications program in 2019.