The ONEC Group of Companies has developed a self-contained mobile generator which can produce up... 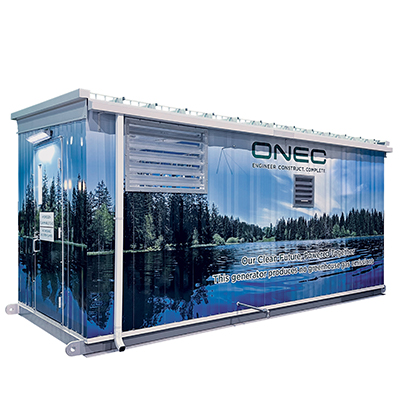 The ONEC Group of Companies has developed a self-contained mobile generator which can produce up to 5 KW of power utilizing a hydrogen fuel cell (HFC) module.

The system, contained in a 10x5x18-foot modular building, can be used as a remote power source or in emergencies until primary power is restored.

Developed in partnership with Gencell Ltd., the HFC building can house up to 15 bottles of hydrogen and two bottles of nitrogen, with each bottle providing about two hours of electricity at maximum output. The module can also accept the fuel from external sources and be transported on a utility trailer.

Israel-based Gencell is a developer of hydrogen alkaline-based fuel cell systems and solutions designed to replace diesel generators. The company’s alkaline fuel cell is the power source for the HFC building.

Founded in 2000, Edmonton-based ONEC provides engineering, procurement and construction management services in Western Canada and the Western United States. About a year ago, the company began looking at the hydrogen market as part of its transition to renewables.

“We met Gencell, a fuel cell provider, and they didn’t have installations in North America,” said Denis Wiart, ONEC’s CEO. “We did another service that we provide some manufacturers, (which is to) ‘Canadianize’ the equipment or get it ready for our climate and our regulatory systems here in Canada. We decided to invest in it, we procured one of the modules, and then we packaged it for Canadian climates.”

The HFC building itself can also be customized in size, as well as logos and images on the exterior. The system is capable of generating 48V DC, 120V AC or 240V AC power.

Wiart explained that the ideal application for these sorts of systems is in remote, off-the-grid locations. The building provides protection from the elements in the case of installing a remote cell tower or valve station, for example. 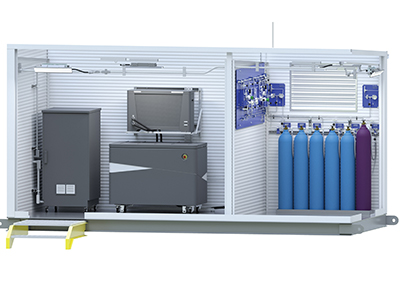 The interior of the HFC building. (Courtesy the ONEC Group of Companies)

The first of these units was completed in early November and has since been transported to ATCO Power’s Nisku, Alta. site, where it will be piloted as an emergency power source for a year. ATCO provided the hydrogen for the test.

One aspect of the pilot project that was important to Wiart was to understand how the HFC would perform during the coldest winter days and nights.

“We’d run a week-long campaign and just see how the units perform during the full range of temperature cycles, from overnight to daytime,” Wiart said.

ATCO also developed a trailer system to provide a bulk hydrogen supply to the building, which is better for long-term applications of the HFC than the bottles.

ONEC had a previous relationship with ATCO going back several years, and the companies are currently collaborating on a solar project in Southern Alberta.

The future of the HFC

Gencell is developing a 10 KW version of the HFC that will also utilize ammonia as fuel, and expect to have that completed by the end of the year. Following that development, ONEC plans to upgrade its building to the 10 KW version.

According to Wiart, Gencell is also considering developing off-grid electric vehicle (EV) charging solutions in Europe. ONEC wants to do the same in Canada with the HFC building, combining that technology with solar power.

“You’d have clean energy in the off-daylight hours, and you’d be using solar during the day,” Wiart explained.

Currently, ONEC is looking at Sturgeon County, Alta. to implement this, although there is no timeline available for completion. Sturgeon County’s mayor, Alanna Hnatiw, is the chair of the Edmonton Region Hydrogen Hub launched in April, 2021 with a $2.3 million investment from Alberta’s Industrial Heartland Association as well as the federal and provincial governments.

Wiart also sees use for the HFC building in remote communities across the country, particularly given ONEC has operations in the Yukon and the Northwest Territories.

“This unit could provide (power for) a few houses. If you had solar-augmented daytime production, maybe with a bit of wind and hydrogen, you’d have enough redundancy of technology,” Wiart said. “It’s the other two that you would use to offset your hydrogen usage.

“You could provide a small community with an off-grid application.”

However, ONEC is mainly talking to industrial clients looking to decarbonize, as they are “more interested and more able to invest in it.”

A hydrogen strategy report from Natural Resources Canada published in December, 2020 states the hydrogen economy could add $50 billion and 350,000 jobs to Canada by 2050.

Nicholas Sokic Carbon Carbon capture National May. 2 2022
Nicholas Sokic Business reporter
Nicholas Sokic is a freelance, Toronto-based journalist. He has covered a number of sectors, including business, finance, crypto, health, cannabis and culture. He graduated from Western University's Master of Media in Journalism and Communications program in 2019.