Fire-resistant qualities in a new form of concrete already recognized for its sustainability, has... 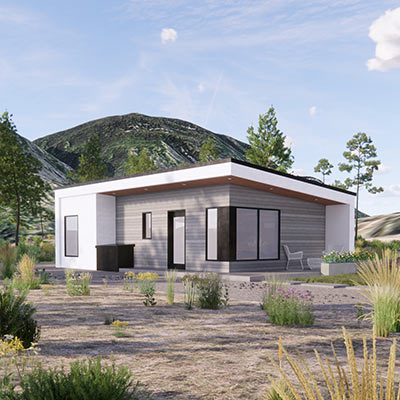 A rendering of one of Nexii’s Lytton homes, which will be built in August. (Courtesy Nexii Building Solutions Inc.)

Fire-resistant qualities in a new form of concrete already recognized for its sustainability, has made it the material of choice to rebuild two homes in the fire-ravaged town of Lytton, B.C.

The concrete is known as Nexiite, developed by Nexii Building Solutions Inc. and manufactured in Squamish, B.C.

In June 2021, 90 per cent of Lytton was destroyed due to a rapidly-spreading wildfire.

The two homes Nexii is collaborating on will be built from components made with the Nexiite. It is poured and cast into panels in the same fashion as traditional concrete but contains no Portland cement, lime or adhesives — resulting in significantly less embodied carbon.

Building construction is responsible for 37 per cent of global carbon emissions each year.

Aside from the sustainability aspect, Nexiite’s fire-resistant qualities also “made them an interesting option for building within the fire zone in Lytton,” the Vancouver-based Nexii told SustainableBiz in an email interview.

The components for the homes will be manufactured in Squamish in August and assembled on-site “in a number of days,” the company told SustainableBiz. “They will be complete and livable by the end of the year.”

A release estimated the homes will be erected in approximately half the time of a conventional residential build, based on results from Nexii’s commercial buildings.

One example of that faster build time is from February 2021, when a drive-through Starbucks in Abbotsford, B.C. was constructed in six days using Nexiite.

According to Nexii’s website, Nexiite results in up to 36 per cent less carbon emissions during production than Portland cement concrete.

Further emissions reductions result thanks to the quantity of materials used and the lower weight to transport. The assembled panels weigh 15 to 20 per cent less than equivalent pre-cast concrete products.

Collaboration with Saferhome, CMHC and more

For the project, SAFERhome received funding from the Canada Mortgage and Housing Corporation under the National Housing Strategy Demonstrations Initiative.

As for whether or not Nexii could play a larger role in the town’s rebuild beyond these two homes, the company would only say, “We are proud to contribute to the rebuild efforts and will continue to offer support and our climate-resilient solutions as requested.”

In other company news, Nexii announced in June a goal of having zero waste at its Squamish plant in 2023. Accomplishing this involves diverting at least 90 per cent of the facility’s waste from landfills.

In September 2021, Nexii became the fastest Canadian company to hit unicorn status – a valuation of $1 billion or more – in less than 31 months.

Nicholas Sokic Carbon CarbiCrete Ontario Jun. 30 2022
Nicholas Sokic Business reporter
Nicholas Sokic is a freelance, Toronto-based journalist. He has covered a number of sectors, including business, finance, crypto, health, cannabis and culture. He graduated from Western University's Master of Media in Journalism and Communications program in 2019.