Hydropower experts from across Canada gathered virtually at the Canadian Waterpower Week conferen... 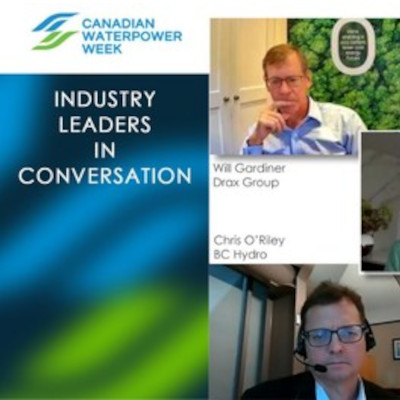 Hydropower experts from across Canada gathered virtually at the Canadian Waterpower Week conference to discuss advancing projects and investments — including hydropower refurbishments and green hydrogen — to achieve the country’s 2030 Paris Agreement climate goals.

Waterpower is Canada’s most abundant source of clean and renewable electricity. It provides more than 60 per cent of Canada’s electricity, with a capacity that will soon exceed 85,000 MW.

This makes Canada the fourth-largest generator of hydroelectricity in the world, and results in one of the world’s cleanest electricity grids.

More than 300 experts from the hydroelectricity industry across Canada and around the world attended the annual national conference, which focused on the industry’s role in reaching net-zero carbon emissions.

WPC Canada members represent more than 95 per cent of the waterpower installed capacity in Canada. They advocate for the responsible development and use of waterpower to sustainably meet the country’s present and future electricity needs.

“Canada is among the best-positioned countries to reach net-zero and hydro is the main reason,” said Patrick D. Bateman, senior vice president of WPC, said in a release,

“What was most striking about this year’s event was the strong sense of urgency shared by presenters and participants,” said Anne-Raphaëlle Audouin, president and CEO of WaterPower Canada, in the release. “We’ve got less than a decade now to meet ambitious and essential emissions reduction targets, and our industry is ready to play what can only be an instrumental role.

“But what the conference also highlighted is the need to move from targets to action.”

Andouin also noted decarbonizing the economy will require sourcing electricity from non-emitting sources — such as hydro — and widespread electrification, including replacing petroleum-fuelled vehicles with electric cars.

To decarbonize the building sector, electrical energy production must reduce its dependence on fossil fuels, such as coal and natural gas, and switch to carbon-free alternatives like solar, wind and nuclear.

“We need new hydropower capacity, but also we need modernizing and upgrading of the existing hydropower capacity,” said Dolf Gielen, director, innovation and technology centre, International Renewable Energy Agency (IRENA) in the release. “Flexibility and storage systems of hydropower can complement solar and wind going forward, and sustainability of hydropower is key in this development.

“Hydro is the largest renewable source in the world — and cheaper than fossil-based production — but we need significantly more hydropower and refurbishment.”

“The world needs an accelerated energy transition going forward, and hydropower has to play a key role,” said Gielen.

Discussions at the conference focused on maximizing the performance of existing hydropower generation stations.

Efforts include SNC-Lavalin doubling the capacity of Ontario Power Generation’s (OPG’s) Calabogie Generating Station in Eastern Ontario. Once the facility’s original century-old powerhouse is replaced, output should increase five to 11 MW by 2022.

“There are really three elements that we’re working on at OPG,” said Nicolle Butcher, senior vice president, renewable generation and power marketing, OPG, at the conference. “That’s maintaining our current assets, so how to refurbish them in a way that allows us to ensure that they’re going to be there for the next 100 years.

“The second thing we’re working on is highlighting the expansion of hydro, so how can hydro help from a storage perspective.

“And then finally building new. So whether it’s completely redeveloping some of our old sites or building new greenfield sites. Those are critical elements that we’re going to develop more in the coming decades to be able to address climate change.”

OPG discussed the conversion of the Eastern Ontario Marmora Mine property into a 400-MW pumped storage hydropower (PSH) facility. The conversion will include a raised reservoir next to an open-pit mine, allowing water to be pumped in a closed-loop, off-river system, which will generate power as the water flows from upper to lower reservoirs.

“We are seeing major interest around the world in PSH projects,” said Stanley J. Kocon, president and CEO of U.S.-based Voith Hydro. “Their contribution to reliability and resilience is really invaluable for clean-power grids.”

The panels also explored using electrolysis to extract hydrogen from water, resulting in green hydrogen when renewable energy, such as hydroelectricity, is used. The resulting hydrogen can be stored until it is required.

General Electric (GE) also presented at the conference, showcasing robots which can repair damage to facilities in unsafe conditions.

The event also hosted a panel on diversity, equity and inclusion and honoured Claudine Bouchard, executive vice president, transÉnergie and construction, Hydro-Québec, with the Woman of Waterpower Award.